Suspect sought in 25 cases of vehicle vandalism in Maple Ridge 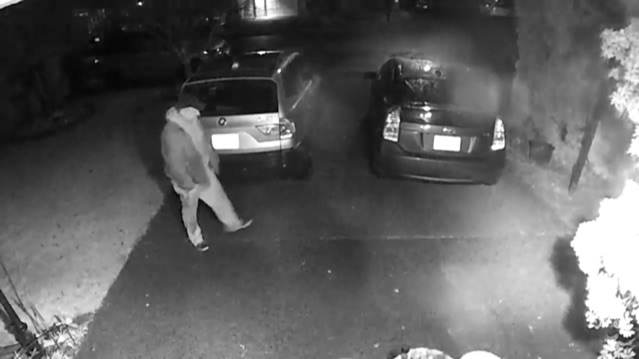 A suspect in more than two dozen cases of vehicle vandalism is seen in this handout image from Ridge Meadows RCMP.

VANCOUVER -- Mounties are asking for the public's help to identify a suspect wanted in connection with 25 cases of vehicle vandalism in Maple Ridge.

Police received multiple calls from local residents on Feb. 16 reporting their tires had been slashed or punctured. The incidents all took place in the area of 224th Street near Abernathy Way and Morse Crescent.

Ridge Meadows RCMP were able to canvass the neighbourhood and obtain home surveillance footage which they believe showed the suspect but say they are still looking to obtain more security video of the area. Fingerprints and other forensic evidence were also collected at some of the crime scenes.

"We have the evidence, somebody knows who this person is, and it’s only a matter of time before someone comes forward to help us identify this suspect," said Const. Julie Klaussner in a statement.

Klaussner said they have "no idea" what the suspect's motive would have been and that in some cases, all four tires on a vehicle were damaged.

"This has caused a huge amount of inconvenience for our victims and we empathize with how they must be feeling right now," she said.

The suspect is described as being 50 to 55 years old and having a heavy build and short grey hair. He was wearing a black ball cap, dark blue or black track pants with a white stripe, black shoes with red soles, and a black jacket with a grey hoodie underneath.

Police are also asking anyone who might have been away for the long weekend and just found out their vehicle was damaged to contact them.