Warning: This article contains disturbing details including physical and sexual violence towards children and a reference to suicide. Reader discretion is advised.

An update on an investigation being conducted at the site of a former residential school in British Columbia included chilling details of what life was like for some of the thousands who were forced to attend.

Tuesday’s news conference was heavy with emotion, and brought many listening to tears. Strong feelings of sorrow and anger were obvious as speakers addressed media, sometimes with shaking voices, other times with the flat, almost resigned softness that can come with the retelling of difficult memories.

And at times, there was nothing but silence.

The headline out of the presentation was that 93 reflections had been detected with ground-penetrating radar at the site of St. Joseph's Mission, a residential school located near Williams Lake.

The so-far unexplained reflections could be human remains, caskets or graves, as all of those would create the anomalies detected by GPR. The project lead said 50 of the possible burials are not associated with known graves in the area, which also contains a cemetery.

The only way to be sure is to excavate the site, and the next steps are still being determined. There's also an area of more than 400 hectares left to search, an area that may be farther expanded depending on what is found.

The results of these geophysical investigation techniques are, in a way, the closest to "hard evidence" when it comes to what happened to the thousands of children who attended SJM, also known by other names, including Cariboo Indian Industrial School.

But they're only one tool being used in the investigation, and only one part of Tuesday's presentation.

Before the data was presented, Kukpi7 (Chief) Willie Sellars spoke to what investigators were told as part of the SJM protect. Documents on Canada's residential school system are still being released by the federal government, some of which officials had previously claimed didn't exist. Other records were destroyed, Sellars said evidence shows.

It is not yet known what those documents will outline, so for now, what there is is the memories of those who attended.

What follows is their accounts, summarized by Sellars.

The mission, near the Williams Lake First Nation community of Sugar Cane, initially operated as an industrial school and a ranch was added in later years to serve the mission. Indigenous children were given "labour-intensive tasks" that included serving white children and staff, timber splitting, cattle rearing, farming and sewing, Sellars said.

Among those reports, which are similar to witness accounts of life at other residential schools in Canada, were stories of starvation, rape and corporal punishment.

Sellars said at one point the school hired an instructor whose principle role was to discipline children. Survivors told stories of children being lashed to boards at the ranch and beaten. Others said they were starved as a punishment, or subject to confinement.

Some were beaten for speaking their language, the chief added. As another form of punishment, children were exposed to "extreme environmental conditions," according to witness interviews conducted as part of the investigation.

The chief told of one child, Duncan Sticks, whose death prompted an inquest in the early 1900s. Sticks was eight years old when he ran away from the school, and he died in the freezing winter weather "while attempting to escape the physical and sexual abuse of St. Joseph's."

The inquest looked into the school's conduct and administration. Documents from that investigation posted online by the First Nations Education Steering Committee, a B.C. board of education, include sworn statements from witnesses who said they'd been served rotten food, hit with a horse whip and blindfolded.

In 1920, parents wrote to the school, Sellars said, following an attempted mass suicide. One child of the nine involved died in that attempt. The death was reported, but Sellars said it was not investigated.

"The matter was left to die," he said quickly.

Outbreaks of diseases including tuberculosis and smallpox occurred at the school during the 90 years it was operating, the drinking water was "repeatedly deemed unsafe" for consumption, and the dormitories had issues with bug and rodent infestations, he said.

Conditions were so bad that the nuns operating the school threatened to leave at one point, Sellars said. And the chief said these particular issues weren't really under wraps.

He said there's evidence from complaints filed to the "Indian agent" in charge of the school that some members of the public knew. But, he said, these complaints weren't regarding the children's welfare.

"One alarming complaint from a Williams Lake resident indicated his discontent that he could not compete with the prison-labour-type production of goods at St. Joseph's Mission. Only due to his lack of profits did he implore the Indian agent to cease allowing child slave labour," Sellars said.

Outlined in one of the Truth and Reconciliation Commission reports, the Cariboo Union Board of Health also looked into the school, in the 1960s, and declared it to be a "public nuisance," but this was because it was dumping 151,416 litres of raw sewage per day into the San Jose River.

The board threatened to have the school closed if the problem wasn’t resolved. It was subsequently shut down in 1981.

Another TRC report includes that the school was overcrowded, with 307 children in attendance in 1967 despite a capacity of 257.

In the 1980s and '90s, after the school closed, two former staff members pleaded guilty to charges of sexual abuse of students – incidents that occurred in the 1950s and '60s, according to the National Centre for Truth and Reconciliation.

A former principal issued an apology in the '90s as well, to a former student and an employee who'd accused him of a series of sexual offences.

"In the present day, the WLFN investigation team is discovering just how deep the well of sexual abuse ran at St. Joseph's Mission," Sellars said.

Allegations include gang rapes and assaults on children as young as seven, the chief added, calling these reports "part of the fabric of this investigation" because they've become so common.

According to Sellars, witnesses said these incidents were so common that if a child was called to the office over the school intercom, it was assumed they'd be assaulted.

He said child pregnancies were "widespread" and "covered up through a variety of means," including the transfer of girls to homes for unwed mothers. Survivor accounts also included details on the deaths of the young mothers and their children.

Sellars said the detailed descriptions the team has heard have been "disturbing beyond words." Some of those accounts are omitted here because of that.

"This serves as a stark reminder that while there is hope that we can heal as a nation, the trauma of individuals and of communities is still very much present. The abuses suffered at St. Joseph's Mission and other institutions are not forgotten footnotes of the past," he said.

"The horrors that occurred inside the walls of St. Joseph's Mission are still very real for those who lived them. The legacy of those who lived them is still readily apparent in the numerous ways inter-generational trauma manifests in First Nation communities."

Sellars spoke critically of those who disbelieve the first-hand accounts, or argue the case in favour of the system.

"Those who would argue that there was somehow a good or benevolent underpinning of residential schools and that this is sufficient justification to discount the horror and suffering that was inflicted upon generations and generations of Indigenous people," he said, his voice swelling with emotion."Not only is this reasoning distorted and wrong, it also serves to compound the trauma that survivors and their families have experienced and continue to experience to this day."

A survivor he quoted said they'd told their parents, the principal, the Indian agent and the RCMP about their rape: "Nobody believed me."

In a statement released after Tuesday's news conference, B.C.'s minister of Indigenous relations and reconciliation wrote of this as a time when many are coming to terms with what survivors have always known.

"The disappearance and deaths of First Nation children at residential schools is well documented in the final report and findings of the Truth and Reconciliation Commission," Minister Murray Rankin said.

"We recognize the extraordinary strength and resilience being shown as more communities take on the difficult, but necessary, task of finding answers for those families that lost children."

As for the investigation, those working at the SJM site hope to be able to bring closure to some families who never knew what happened to children who left home and didn't return.

"At St. Joseph's Mission, survivor stories tell us that many children will remain unaccounted for, even after our geophysical and archival work is complete. That is very scary and disturbing," Sellars said.

The retelling of these accounts has been challenging, and the Williams Lake First Nation chief emphasized to those who've survived and those listening to the stories of survivors that they're not alone, and there is support available.

Those looking for someone to talk to who've been affected by the system can contact the Indian Residential School Survivors Society at 1-800-721-0066. The IRSSS also operates a 24-hour crisis line at 1-866-4419.

There is also a National Indian Residential School Crisis Line, with services including cultural and emotional support and professional counselling. 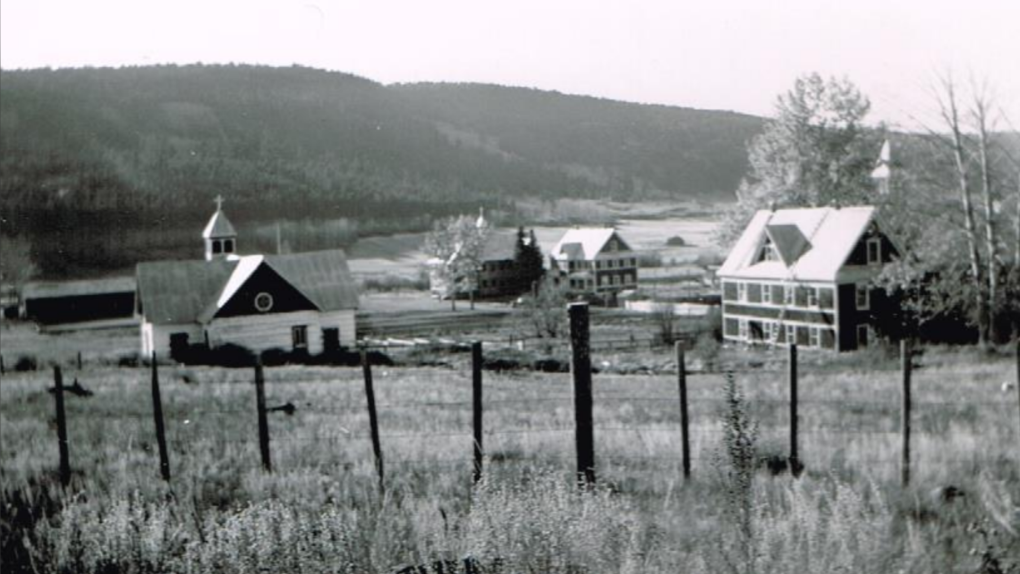 St. Joseph's Mission is seen in this undated photo submitted to and published by the SJM team.

Some are calling attention to a comment about 'Anglo-Saxon words' that Conservative leadership candidate Pierre Poilievre made while appearing as a guest on controversial psychologist Jordan Peterson’s podcast. The term has been used by those on the far-right to differentiate white people from immigrants and people of colour.

Jason Kenney steps down after 51.4 per cent approval in leadership review

First case of rare monkeypox in the U.S. was someone who recently travelled to Canada

A rare case of monkeypox has been confirmed in a man in Massachusetts who recently travelled to Canada, according to the Massachusetts Department of Public Health.

Prince Charles and Camilla, Duchess of Cornwall, are spending the final day of the royal visit in Canada's North.

Hundreds more fighters have emerged from the Mariupol stronghold where they made their last stand and surrendered, Russia said Thursday, and the Red Cross worked to register them as prisoners of war, as the end of a key battle in the conflict drew closer.