VANCOUVER -- Several people are now in custody after an early morning shooting in Whalley.

It happened just before 5 a.m. Saturday morning near 139A Street and 108 Avenue.

Two homes were behind police tape for much of the day, one riddled with bullet holes.

“This area is literally not really safe. So I wasn't really shocked when that happened,” said Mann Goswami, who lives in the area.

RCMP began their investigation at the targeted home, which quickly lead them to the house across the street.

Several people were taken into custody, but no one was hurt.

"Exactly why it unfolded, the relationship between the two residences, has yet to be determined and is part of our investigation,” said Inspector Manly Burleigh of the Surrey RCMP.

The shooting comes just days after a man was shot and killed at a playground a few blocks away.

Some who live in Bolivar Heights say they’ve reached their breaking point.

"That's why I’m moving,” said Tyler Gordon as he walked by the crime scene on his way to work.

A neighbour who didn’t want to be identified says the violence comes with the territory.

"It’s cheap, that's the only reason why I live here,” he explained.

"It's Surrey,” he said with a chuckle, “It's crazy. There are too many guns around and I don't know. It needs to be stopped somehow." 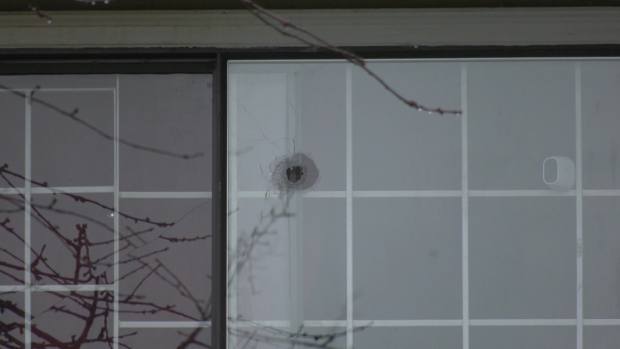 An exchange of gunfire left one Surrey house riddled with bullets. (CTV)

The creator of a campaign rallying to keep the RCMP in Surrey is also concerned.

"We're getting into a culture of shootings. People believe that they need to shoot to solve problems,” said Ivan Scott.

Scott believes it’s a symptom of a lack of hiring, with no additional police officers hired in Surrey in two years. City council has not budgeted for any extra officers in 2019 and 2020 as it prioritizes the creation of a new municipal police force.

"When you refuse to give anymore, you start falling behind and so things have got to be prioritized and I think things are starting to fall through the cracks,” Scott told CTV News.

That's why he's continuing to petition against the Surrey police transition.

"We're in this for the long haul. I'm not in this to play games. We're here to win,” said Scott.

The transition is now before a joint provincial-city committee.

"Nobody's ever asked us what we want,” said Scott.

He is now calling for a policing referendum so all citizens can decide how to prevent the type of violence seen this week.