SURREY – Hundreds of Surrey residents are at risk of becoming homeless after they were served an eviction notice by Peace Arch RV Park.

Some have lived in the park for decades, but a series of legal battles is now forcing them all out.

Cindy Key has lived in a mobile home in the park for three years.

“This is the letter we received,” said Key as she pulled out an eviction notice and contract from her files.

The notice was written generically and was handed out to all long-term residents. 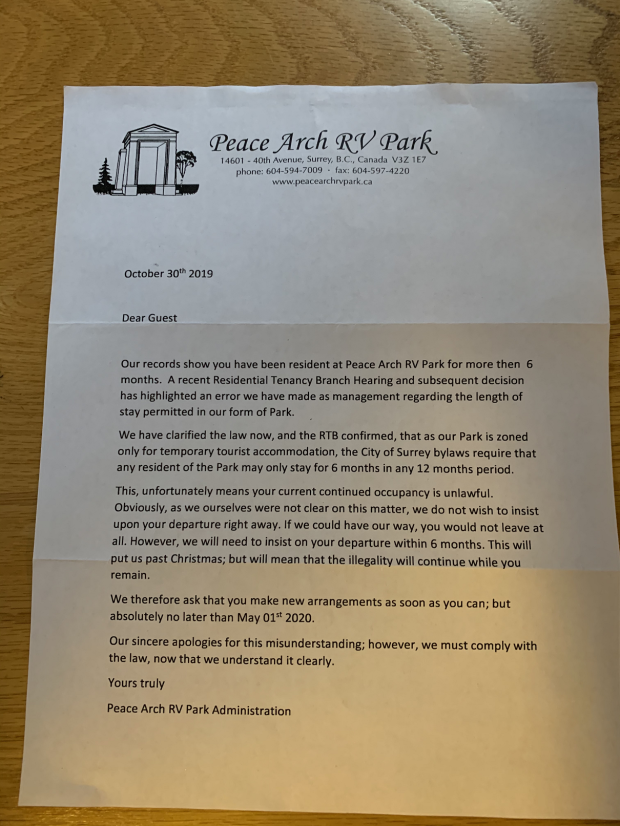 “Some of these people have been here for a long time and for them just to be uprooted, I think it would be disheartening," Key said. "We’re just praying that’s not going to happen."

She says many of her neighbours are like family, adding they all look out for each other.

That sense of community has extended to park management and staff as well.

She’s hopeful they’ll be able to come up with a solution.

The mass eviction was inadvertently triggered by 16 of her neighbours.

The group filed a complaint with the Residential Tenancy Branch this year.

Legal counsel for the park says the eviction notice was not sent out of retaliation.

“When this all came up, it was us simply responding to the allegation that the park had increased the rent beyond what was allowed in the legislation,” said Philip Dougan, the lawyer representing Peace Arch RV Park.

The RTB ruled that because the park was zoned as a recreational tourist site, residents had no rights.

“So, these folks basically had a long term hotel to stay in, but unbeknownst to even the owner of the park, people were staying there far too long,” Dougan said.

He says the owner would prefer to keep guests long-term, as that creates financial stability, but she cannot pick and choose which laws to follow.

It was also discovered the length of their stay was violating a Surrey city bylaw.

“Residents are only allowed to stay in their RVs in an RV park for up to 182 days,” said Linda Annis, a Surrey city councillor.

Annis believes this rule has never actually been enforced.

“Housing is at such a shortage, particularly affordable housing," the councillor told CTV News Vancouver. "I don’t think this is the right time to be enacting a bylaw like this."

She plans to bring up the issue with city staff next week.

Surrey recently passed a new bylaw that makes sleeping in an RV on city streets illegal.

Annis says she voted against it and would like the city to revisit its housing strategy.

“People are contemplating suicide in here," said Jonn Darnel, who has lived in the park for 10 years. "Older people don’t know where to go.”

The retiree says relocating will be a challenge for himself and for many others.

Many of the RVs have permanent structures that prevent them from being mobile.

“Now where am I going to go if I get kicked out?" Darnel wondered. "Well, I guess we’ll make a caravan and surround City Hall and they can figure it out.”

Dougan says the owners of the park could potentially apply to the city for rezoning to make it a mobile home park, but he says he would advise against that.

“It would be once done, never undone,” the lawyer said.

He says rezoning would make it difficult for the owner to resell the land to a developer in the future.

Dougan had advised his client to follow Surrey’s bylaws, regardless of if they’re enforced, because an infraction could cost up to $2,000 a day.

The RV park has given residents until May 1 to move out.

Anyone who does not comply will be towed at their own expense.