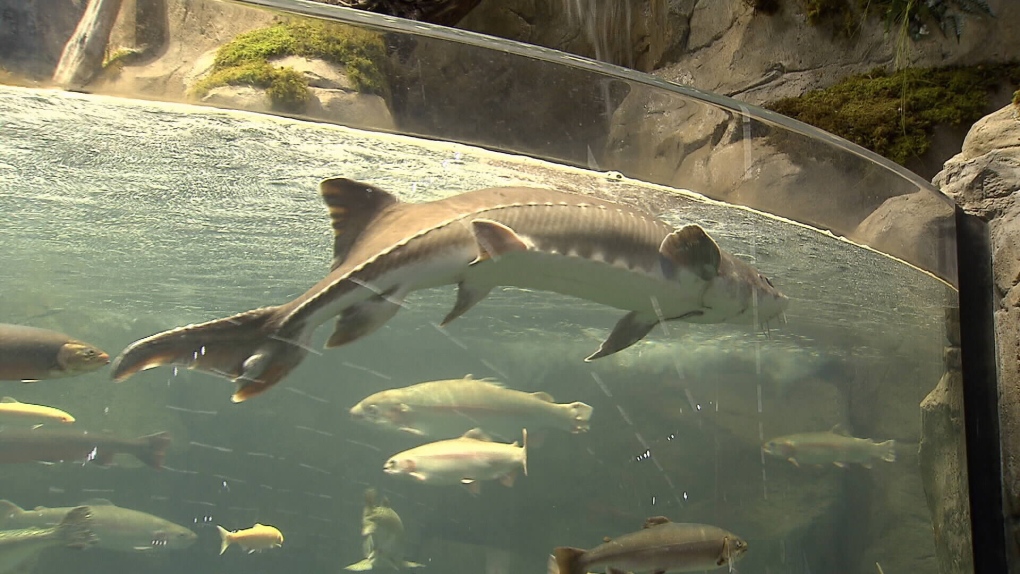 A white sturgeon swims near the surface of a 15,000-gallon aquarium inside the Bass Pro Shops at Tsawwassen Mills mall. Oct. 7, 2016. (CTV)

A massive white sturgeon that was the subject of a petition targeting a brand new megamall has been euthanized.

The five-foot sturgeon and was living in an aquarium at Tsawwassen Mills, the new mega mall that opened near the ferry terminal at the beginning of the month.

The giant fish, which came from a Sunshine Coast farm, was the subject of a petition filed just days after the Bass Pro Shop at the mall opened.

It was living in a 15,000-gallon freshwater aquarium with other species of fish.

But some animal rights activists said they were concerned about the behaviour of the fish, which was seen bobbing on the surface of the tank. At the time, experts said the fish could be acclimatizing to its environment but in a statement to CTV, the shop’s general manager said the fish’s behaviour lasted longer than the standard acclimation period.

“After performing an additional examination that revealed significant internal complications, veterinarians concluded the most responsible action was to humanely euthanize the fish. While full results are still pending, the condition was unrelated to the aquarium or the care provided and the fish likely developed the condition prior to its arrival,” said Gerry MacIntyre, the store manager of Bass Pro Shops.

The white sturgeon was designated an endangered species in 2003, and four of the six populations found in B.C. are listed under the Species at Risk Act, meaning they can't be fished. The others are strictly catch-and-release.

But the sturgeon inside Bass Pro Shop came from Northern Divine Aquafarms, a land-based Ocean Wise farm. General manager Justin Henry said they only transfer fish to an aquarium if certain conditions are met.

“Our mission is to inspire people to enjoy, love and conserve the outdoors. When people come to Bass Pro Shops and see these incredible animals up close, we know they will want to explore their natural habitats and help protect our native species for future generations,” MacIntyre said.

Farmed sturgeon can't be released into the wild, but petitioners said they believed the fish could still have a better life somewhere other than Tsawwassen Mills.

The petition's creator suggested the farm could take it somewhere "closer to its natural habitat" as opposed to a tank in a mall. The petition to have the fish removed from the tank was signed by 702 people.

With files from CTV Vancouver's Andrew Weichel and Jonathan Glasgow