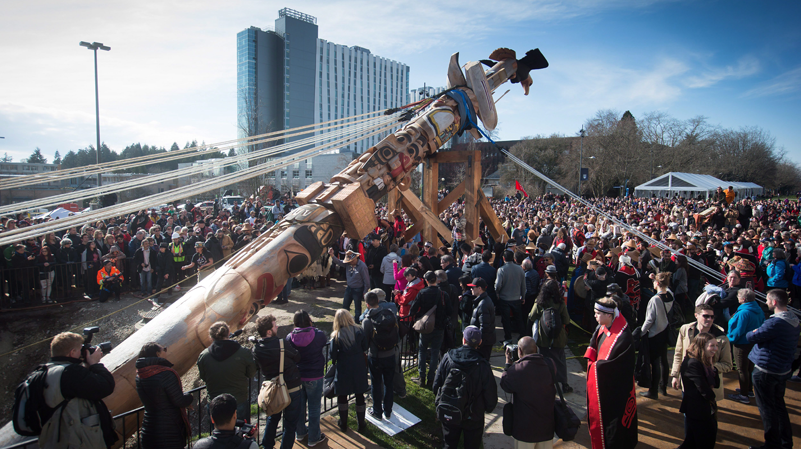 People gather to watch as a totem pole is raised in the spirit of reconciliation at the University of British Columbia in Vancouver, B.C., on Saturday, April 1, 2017. The 17-metre red cedar pole tells the story of the time before, during and after the Indian residential school system. THE CANADIAN PRESS/Darryl Dyck

VANCOUVER - After recovering from the trauma of being separated from her family as part of the '60s Scoop, Roberta Price has co-authored a study that applies the same traditional methods that helped her to other Indigenous women.

Price, who is an elder from the Coast Salish Snuneymuxw and Cowichan Nations, said finding her family as an adult and reading about the horrors of the '60s Scoop in court documents brought her to a dark place.

But when a friend and former colleague got Price in touch with her own traditional elders, they took her under her wing and knew what she needed.

“I was so broken, so wounded, so beaten down in my spirit,” said Price, who's also an adjunct professor at the University of British Columbia's family medicine department.

“Those elders, they are the ones who helped lift me up.... Learning about the culture - cultural teachings, stories, songs - really brought my strength out.”

Price and her co-authors applied a similar technique to Indigenous women recovering from the trauma of partner violence, in a study published in the Journal of Interpersonal Violence.

The study did not include a control group that received treatment without elder-led circles or cultural elements, and the results were self-reported.

However, the research suggests that the health of the women improved when the healing process integrated elder-led circles and other cultural elements.

The study from the University of British Columbia and Western University focused on nurses working with women individually over the course of six to eight months.

Their treatment included weekly circles or group activities led by an elder, which involved sharing personal stories and aspects of Indigenous culture through ceremonies, cultural teachings and traditional crafts.

Colleen Varcoe, a professor of nursing at UBC, said at the end of the program, the women reported significantly fewer symptoms of trauma and depression, as well as a better quality of life compared with how they felt in the beginning.

“What was really important to us, is that we get advice from Indigenous elders regarding what a supportive program would look like,” said Varcoe.

Participants included 152 Indigenous women from different communities and language groups who were living in Vancouver and Surrey, B.C.

Most had survived childhood abuse in a residential school, in addition to partner violence.

Price said treatment can be much more effective if integrates traditional ways of knowing and being, because that gives women who have experienced trauma an identity that they “should have known from birth.”

Varcoe said researchers measured women's trauma symptoms before the start of the study and again six months later, and found “enormous changes” over the course of the study.

Price said some of the changes are rapid, while others take time.

“It's not that I walk in as elder and say I'm going to share this and you're going to be fine tomorrow,” she said. “But I work with people. It's on their time.”

Price said she wants to see the program, which is now being tested in three provinces, extended throughout the country.