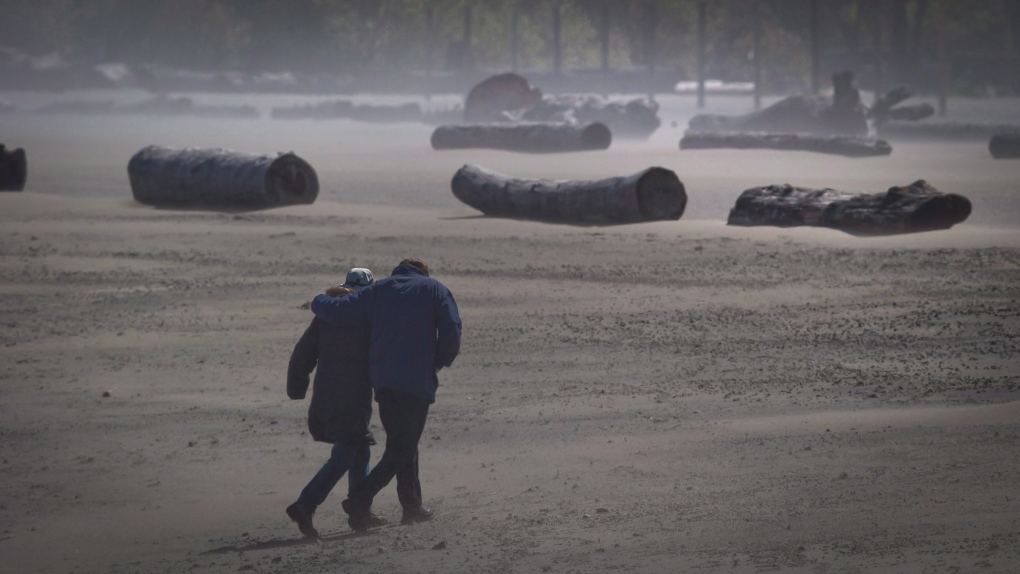 High winds whip up sand as a couple walks along Spanish Banks Beach in Vancouver, B.C., on Monday April 29, 2013. THE CANADIAN PRESS/Darryl Dyck

VANCOUVER -- Strong winds are expected to be heading for Metro Vancouver, a weather warning says.

Environment Canada issued a special weather statement early Monday morning, saying gusts of up to 90 km/h are expected on Tuesday.

Later in the day, the statement was upgraded to a warning for parts of the region including Vancouver.

"The highest winds are expected to be ahead of the associated cold front that will cross the inner south coast Tuesday morning to midday," the weather agency said.

"Wind warnings may be required as the event draws near. Strong winds may toss loose objects or cause tree branches to break."

The warning is in place for most of the region including Vancouver, Burnaby, New Westminster, the North Shore, Coquitlam, Maple Ridge, Surrey, Langley, Richmond and Delta.

Outside Metro Vancouver, some regions also have wind warnings in place, as winds could reach 80 km/h on the Sunshine Coast and 90 km/h along eastern Vancouver Island.

Other areas under wind warnings in B.C. are the Central Coast, Victoria, Howe Sound, northern and western Vancouver Island and the Southern Gulf Islands.

Inland Vancouver Island is under a special weather statement related to the same weather system.

The winds are predicted to ease by Tuesday afternoon.

Vancouver saw some rain on Monday, with temperatures staying stable around 9 C.

On Tuesday, high temperatures could reach 13 C and dip no lower than 8 C, despite the cold front. Rain is expected to continue throughout the week.

Resident elsewhere in the province may see snowfall or conditions similar to those during winter storms. Warnings or statements are in effect for the following regions: