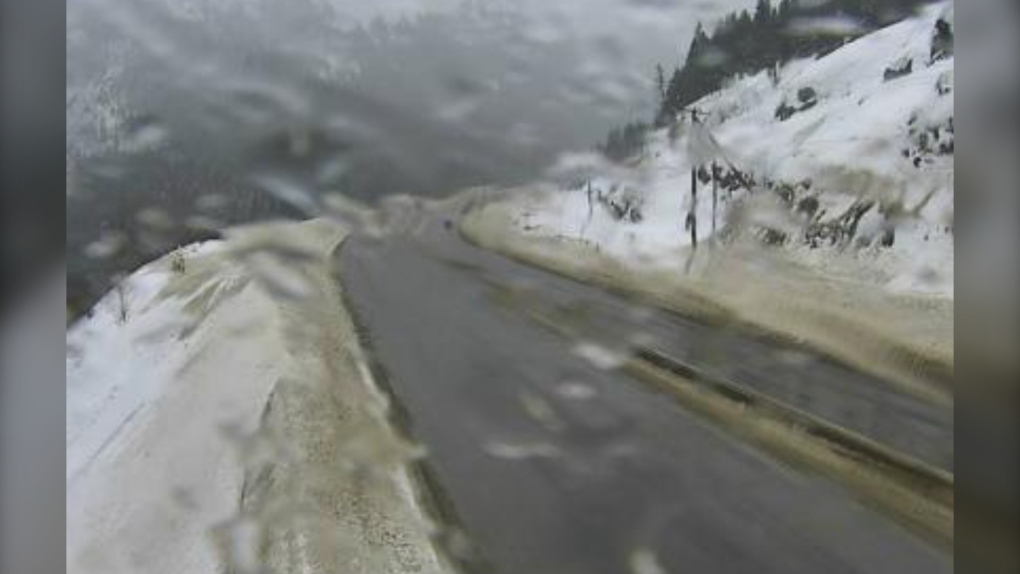 The Coquihalla Summit is seen in this image from a DriveBC highway camera. (DriveBC)

VANCOUVER -- Environment Canada has issued rainfall warnings for the Fraser Valley and Howe Sound regions, and a winter storm watch is in effect for two major highways in B.C.'s Interior.

The weather agency says between 50 and 60 millimetres of rain are expected in eastern sections of the Fraser Valley and in Howe Sound as a frontal system "laden with subtropical moisture" moves across the South Coast.

Rain was expected to be steady throughout the day Sunday, becoming heavy in the evening in the specified regions. Environment Canada says the rain will taper off overnight over Howe Sound and early Monday morning in the Fraser Valley.

"Heavy downpours can cause flash floods and water pooling on roads," the agency said in its warning.

While the storm will bring rain at most elevations, snow is expected along the Coquihalla Highway between Hope and Merritt, as well as along Highway 3 between Hope and Princeton, according to a winter storm watch from Environment Canada.

That snow should give way to rain at most elevations by Sunday night, Environment Canada said, adding that there is "the potential for heavy snow" at the Coquihalla Summit and Allison Pass.

"As the cold front approaches ... precipitation rates will intensify and thus there is potential for snow levels to drop just below the summit or pass levels," the agency said in its winter storm watch. "Total snow accumulations near 25 centimetres can be expected near the summit level by Monday morning."

The provincial Ministry of Transportation, through DriveBC, has issued a travel advisory for the Coquihalla Highway from Hope to Merritt, saying heavy snowfall expected over the next 24 to 48 hours could increase avalanche risk along the highway.

"Crews are assessing and may be required to close the route with short notice for mitigation works," DriveBC said in its advisory.

Environment Canada advises drivers to pay attention to changing weather and road conditions as the snow level and the intensity of precipitation could fluctuate.

"Rapidly accumulating snow could make travel difficult over some locations," the agency said. "Visibility may be suddenly reduced at times in heavy snow."