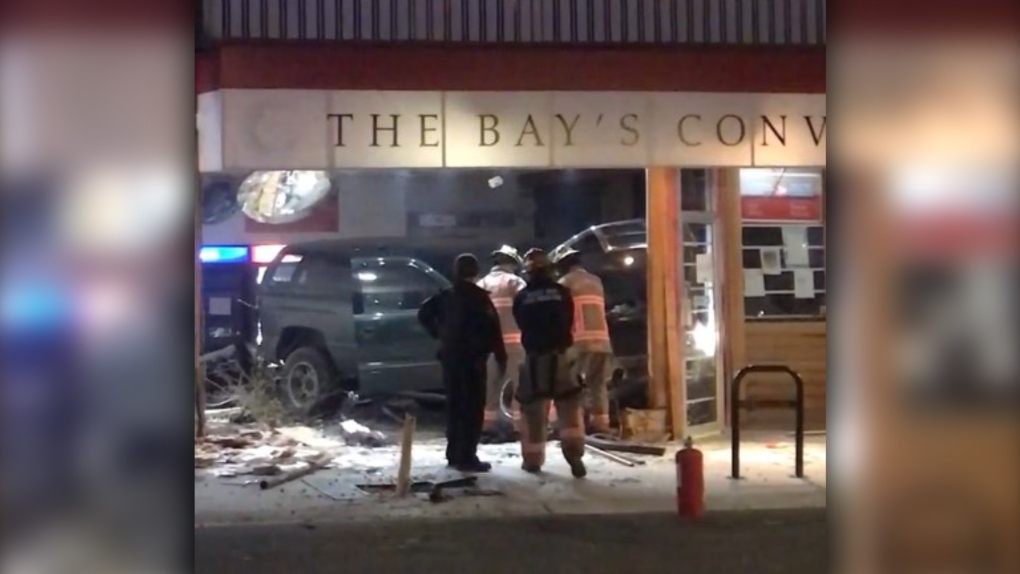 Police and firefighters respond to the scene of a break-and-enter involving a stolen truck in West Vancouver, B.C., on April 5, 2021. (Daniela Coen)

VANCOUVER -- Police are trying to track down two suspects after a stolen truck was crashed through the front of a Horseshoe Bay convenience store early Monday morning.

West Vancouver police suspect the occupants of the vehicle were targeting a Canada Post outlet located inside The Bay's Convenience on Royal Avenue.

Authorities said the truck slammed into the front of the store at around 1:56 a.m., prompting multiple calls to police.

"The witnesses involved stated that three suspects were seen fleeing the scene after they attempted to get their truck out of the building," Const. Nicole Braithwaite said.

The truck remained lodged inside the building when police and firefighters arrived at the scene.

Officers requested help from North Vancouver RCMP and the Vancouver Police Department, and one suspect was found and arrested with help from a canine unit. The other two suspects remain on the loose.

Braithwaite said the break-and-enter caused "extensive damage" to both public and private property. There are a number of homes in the area, including directly above the convenience store.

"We're just lucky that, given the time of day, nobody was injured in this event," she said.

West Vancouver police said their investigation is still in the early stages, but that it's possible the suspects were hoping to steal mail and packages.

Authorities have already obtained some CCTV video from the area, but asked anyone else who witnessed the incident or has video they haven't shared with police to come forward.