OTTAWA -- Canada's national homicide rate last year was the highest it's been in a decade, Statistics Canada says, because of a spike in gang-related violence and shootings.

In a report released Wednesday, the agency said there were 660 reported homicides in Canada last year.

Much of the increase was linked to a dramatic rise in the number of gun-related killings, which itself was driven by more gang-related violence.

"Gang-related homicides committed with a firearm represented 12 per cent of all homicides in 2015," Statistics Canada said. "By 2017, this proportion had grown to 21 per cent."

The federal Liberals and Conservatives earlier this month presented competing plans for tackling guns and gangs, which had emerged as significant public-safety concerns even before Statistics Canada's findings were released on Wednesday.

The Trudeau government announced on Nov. 7 a plan to spend $86 million on expanded intelligence and border-security measures for the RCMP and Canada Border Services Agency -- part of a five-year, $327-million funding promise made earlier this year to stop criminal gun and gang activities.

The same day, Conservative Leader Andrew Scheer laid out his own proposal. It would include more punitive measures for gang members, including longer jail sentences and limited parole and bail opportunities for repeat and violent offenders.

The moves and promises came after a rash of shootings this year, including a mass attack on Toronto's Danforth Avenue in July that killed an 18-year-old woman and a 10-year-old girl and injured 13 others.

Statistics Canada reported that Toronto accounted for the most firearms-related homicides of all cities last year, but British Columbia and Quebec were largely responsible for pushing up the national homicide rate.

"With 2.45 homicides per 100,000 population, the homicide rate in British Columbia was up 32 per cent, making it the province's highest rate since 2009," the agency said. "This increase occurred in both urban and rural areas and can be partly explained by more gang- and firearm-related homicides." 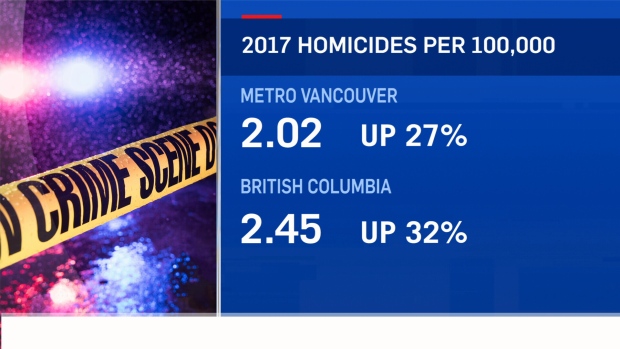 Handguns accounted for 60 per cent of gun-related homicides last year, the agency added, which continued a trend that has seen a steady decline in the number of deaths from rifles and shotguns.

The Danforth shooting led to calls for Ottawa to ban handguns and assault weapons, including from both Montreal and Toronto city councils. Federal consultations on a possible ban are ongoing.

While the increase in the national homicide rate may be troubling, Statistics Canada noted that it remains much lower than the peak of three per 100,000 people in 1975 and accounted for less than 0.2 per cent of all violent crimes reported to police last year.

But the agency said the rates of other serious offences, including attempted murder, sexual assault, robbery and aggravated assault were all up last year, as was the use of guns in violent crimes. 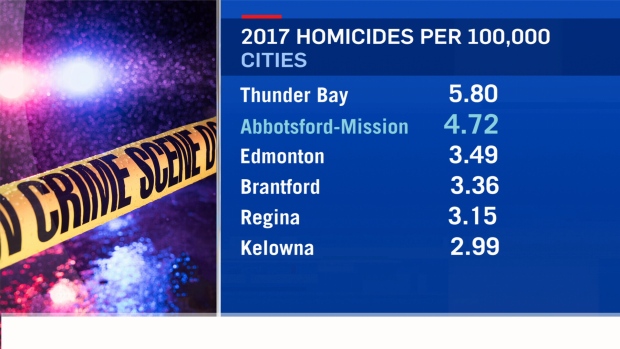