Spike in calls to B.C. poison control over exposure to household cleaners

VANCOUVER -- Over a period beginning early March, the B.C. Centre for Disease Control reported a spike in calls to poison control about exposure to household cleaners.

While the BCCDC said cleaning with disinfectants and other cleaning products can help stop the spread of COVID-19, the agency also warned that proper precautions should be taken to ensure people don't put themselves or others at risk.

B.C.'s Drug and Poison Information Centre typically receives about nine calls a week related to adults being "exposed" to bleach. But from March 8 to April 11 this year, those calls climbed sharply and averaged 24 per week, according to data released by the agency on Thursday.

"Fortunately, we haven't seen any serious injuries, but ingesting or improperly mixing cleaning chemicals can be fatal," Dr. Tom Kosatsky, the medical director of environmental health services at the BCCDC, said in a news release. "We're glad to see the people of B.C. taking measures to prevent the spread of COVID-19, but please keep in mind that cleaners and disinfectants are powerful substances and need to be used safely."

According to data from the BCCDC, the calls appear to have spiked the week of March 22, which roughly coincides with the time British Columbia residents were encouraged to stay at home as much as possible to help stop the spread of COVID-19. Since mid-March, the agency recorded a 60 per cent increase in calls related to exposure to household cleaners and disinfectants.

During that time period, among adults, there were 24 calls specific to the inhalation of household cleaning products, as well as 21 about ingestion, and 15 others about skin contact. There were also 20 calls about "other" exposure.

The cleaning products included bleach, disinfectant, as well as other substances, but excluded hand sanitizer. Of those calls, two were considered to have potentially "moderate and major" effects, according to BCCDC data.

"Calls about bleach are particularly concerning because mixing bleach with vinegar, ammonia or rubbing alcohol can create toxic gas," the BCCDC said. The agency also noted that although the increase in calls has been about exposure among adults, it's very important to keep cleaning products away from children.

When cleaning at home, the BCCDC recommends following all directions on labels, never mixing chemicals, and diluting bleach with water or rinsing surfaces with water after using bleach to clean. Fresh fruits and vegetables should be rinsed with clean water, and bleach and other disinfectants should never be used on food, the agency said. Additionally, cleaners should always be stored in a safe place when not in use.

The agency also recommends doing the following if accidentally exposed to something toxic:

The BCCDC recorded this increase in calls about exposure to household cleaners before U.S. President Donald Trump suggested in a news conference on April 23 that the coronavirus could be treated by injecting disinfectant. Those comments were widely condemned, and Trump later said the suggestion had been sarcastic. 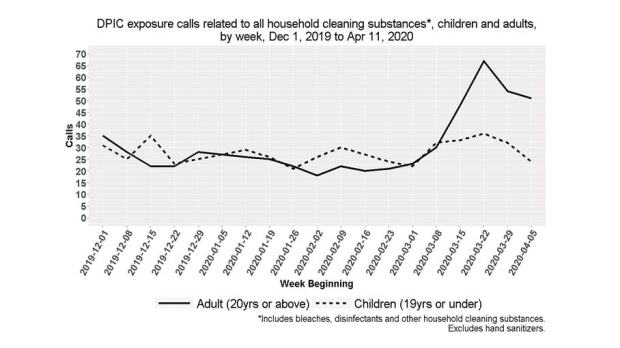 Were you at this 'rave'? B.C. health authority says you need to watch for COVID-19 symptoms