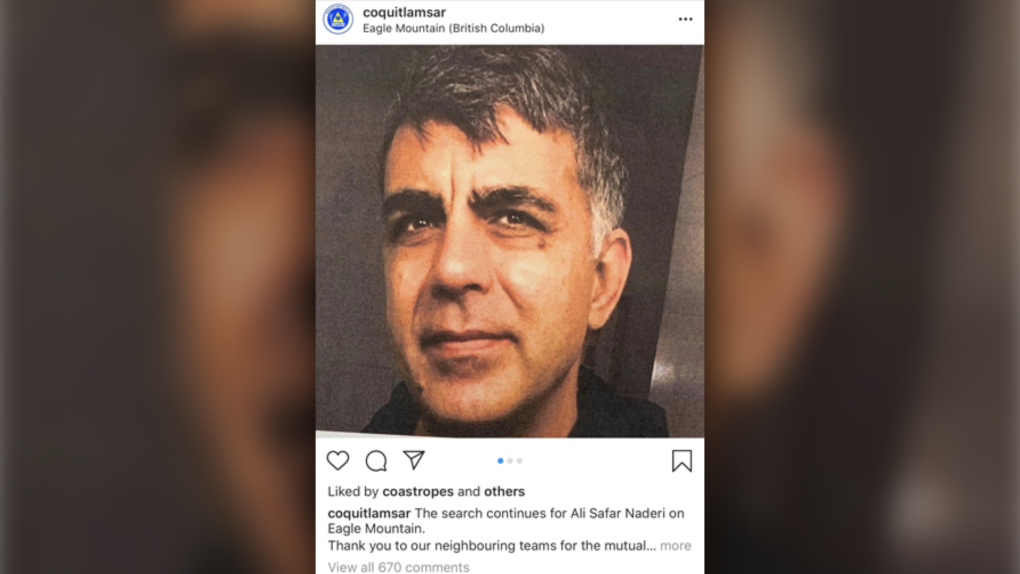 A screenshot provided by RCMP shows 670 comments on a recent post about Ali Naderi on the Coquitlam Search and Rescue Instagram page. (Handout)

Hundreds of people have commented on Coquitlam Search and Rescue's Instagram page since the search for 52-year-old Naderi was called off on Monday.

Coquitlam RCMP called the social media campaign "an understandable emotional response," but said it could hamper the search team's other operations. Cpl. Michael McLaughlin also pointed out the decision to suspend the search was not made by Coquitlam SAR alone.

"RCMP worked closely with SAR from the beginning. We agreed that it did not make sense to continue the physical search after seven days," McLaughlin said in a news release.

As of Thursday, Coquitlam Search and Rescue was assisting with two other search efforts, McLaughlin added. The team's most recent Instagram posts had comments turned off on Friday.

The decision to suspend the search for Naderi was difficult to make, authorities said. Clues about the experienced hiker's whereabouts early on in the effort – including a picture of Naderi taken on a motion-activated trail camera – gave crews hope they might be able to locate him.

He vanished while hiking in the area of Eagle Mountain. Over the following week, a crew of 183 trained volunteers spent a combined 2,400 hours searching using GPS, drones, helicopters and search dogs.

Police said the team covered 48,000 square metres of trail, but that each day meant "entering riskier terrain with less certainty that they were looking in the right direction.

Authorities said if they receive information that points them towards Naderi's location, they could resume the search. In the meantime, the RCMP investigation into his disappearance will remain open.