Snowbirds plane may have struck bird before fatal crash in B.C. 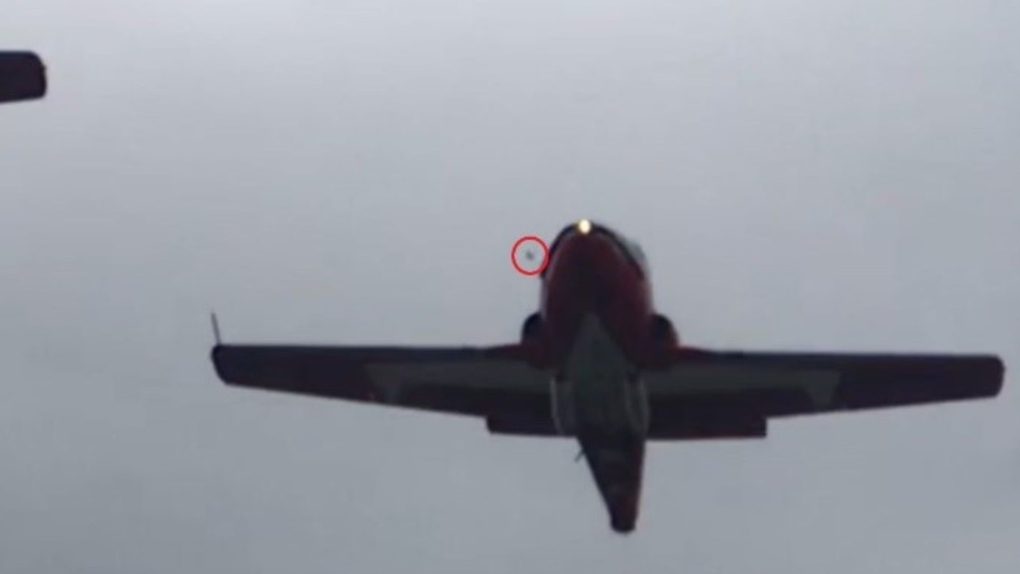 A still image from video provided by the RCAF shows a bird near the engine of a plane shortly before a crash in Kamloops, B.C.

VANCOUVER -- An overview of the ongoing investigation into a fatal crash in B.C. suggests the small plane may have struck a bird.

The Royal Canadian Air Force says video captured after takeoff showed a bird "in very close proximity" to the front of the plane on May 17.

The RCAF briefly outlined the events of that day in a preliminary report posted Monday.

The Snowbirds air demonstration team left Kamloops, B.C., and was to "reposition" in Comox as part of what the force called "Operation Inspiration."

The Snowbirds had been doing flyovers of Canadian communities as part of a show of support for workers on the front lines of the COVID-19 pandemic.

Two CT-114 Tutor aircraft were in formation for the flight.

The one that crashed contained the pilot and the Snowbirds' public affairs officer, Capt. Richard MacDougall and Capt. Jennifer Casey.

Casey, of Halifax, died in the crash.

The RCAF update says both planes took off, and one seemed to be gaining altitude, leaving the planned formation.

Both people in the plane ejected, and the aircraft crashed in a residential neighbourhood in Kamloops.

Casey died in the incident. The pilot was seriously injured.

Video was reviewed as part of the investigation, and it appears a bird was near the right engine of the plane Casey had been on during "the critical phase of takeoff," the RCAF update said.

The investigation is focused on environmental factors including the bird, as well as the occupants' escape system, the force said.

In an emailed statement from the federal Department of National Defence, RCAF Commander Lt. Al Meinzinger said MacDougall has since returned home.

"Our thoughts remain with (Casey's) family, the Snowbirds, and the public affairs branch… To the City of Kamloops, the first responders, and the surrounding communities, you have shown our RCAF family the goodness of your hearts," he said.

"We will not forget your support and kindness – my sincerest thanks."

The day after the crash, there were calls for the aircraft involved to be grounded permanently.

The CT-114 Tutor has been used for decades to train jet pilots in the RCAF and Canadian Forces, and an engineer said he thought it was time they be replaced.

Speaking on CTV News Channel May 18, Arthut Rosenberg said the model was a "terrific trainer" for its time, but, "It's had its day. It should be retired."

There have been several fatal crashes involving Snowbirds pilots over the last 50 years.

But Lt.-Col. Mike French, commanding officer of the 431 Squadron Snowbirds, said the aircraft are rebuilt approximately every two years.

"We're dealing with basically an as-new, mint condition airplane when we do that," he said.

And the planes are also checked prior to each flight.