Smoking on balcony may be behind massive Surrey apartment fire

A Surrey fire that left more than 100 people homeless may have been sparked by a resident smoking on a balcony.

A four-storey building in the northwest portion of the city went up in smoke at approximately 10:30 p.m. on Saturday.

By the time firefighters reached the building, at 82 Avenue and 121A Street, the flames had spread to the roof. The fight took nearly five hours, but crews were still on scene on Monday monitoring hot spots.

Dozens of the building's residents – many of whom are elderly – have been left without homes as a result of the devastating blaze.

"We were all crying, hugging each other, looking for each other, making sure everyone did get out," resident Salima Teja recalled.

Teja returned to the scene on Monday, and met some of her neighbours who were able to gather items that were salvaged by the building's security, including medication and ID. She wasn't able to collect anything from her home, but got a first-hand look at how damaged the building was.

"We're alive. We're grateful. And the best thing we can say is nobody got hurt," she said. 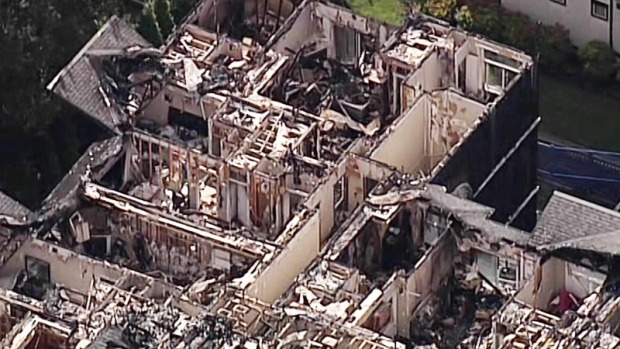 As the embers smoldered, officials began their investigation into what may have sparked the fire that tore through the 77-unit building. On Monday, Surrey Fire Assistant Chief Steve Robinson said they believed it may have been started by a cigarette.

"We believe the fire started on an exterior balcony, possibly on the second floor," Robinson told CTV News.

"We're not 100 per cent sure of the exact cause, but we do believe there may have been smoking materials involved in that."

The fire has officials renewing their calls for sprinkler systems that extend to balconies and front porches.

A study published in 2013 from the University of the Fraser Valley's Joseph Clare and Surrey Fire Chief Len Garis showed that nearly 10 per cent of fires in multi-residential buildings begin outside. The study also found that damage associated with fires sparked on balconies, patios, porches and decks was 2.4 times greater than the average loss in all other multi-residential fires.

The study was based on information from the British Columbia Office of the Fire Commissioner, and looked at all 2,368 fires reported at multi-residential buildings between 2006 and 2011.

Researchers recommended that the B.C. building code be updated to include mandatory sprinklers on balconies in all new mid-rise multi-residential buildings.

Robinson said Surrey Fire crews have had three similar fires in the last couple of years.

"We're working very hard to try and get legislation so that sprinklers are put on the balconies of buildings," he said.

Many of the residents of the building did not have contents insurance, and anyone wishing to donate is asked to visit the city's website for more information.

With a report from CTV Vancouver's Michele Brunoro 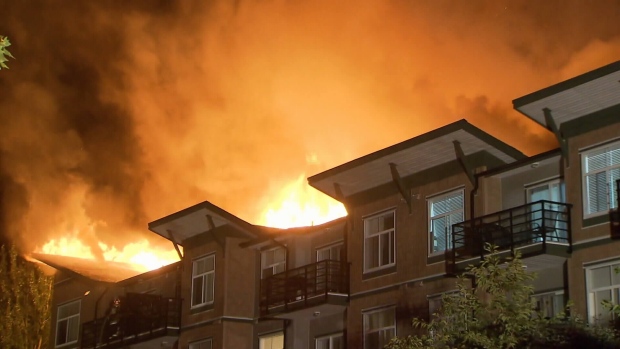