SkyTrain service halted by tree on the tracks in Port Moody

VANCOUVER -- A fallen tree brought trains to a halt for more than an hour on Metro Vancouver's Millennium Line.

The Expo and Canada lines were not affected, but those who use Millennium were impacted during the closure.

In an emailed statement, TransLink said was no SkyTrain service between Burquitlam and Coquitlam Central stations, and a bus bridge had been set up. Delays were possible elsewhere as a result, it warned.

Those looking for a way to get around during the stoppage were advised to use TransLink's Trip Planner, and to select "Don't Use SkyTrain" under advanced search settings.

"We thank our passengers for their patience and apologize for this inconvenience," spokesperson Ben Murphy said.

Crews could be seen breaking up the tree as they stood on the elevated tracks at around 1:30 p.m., and about an hour later, TransLink said service was resuming. 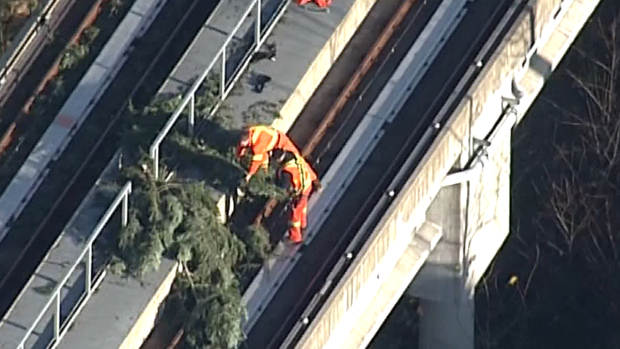 Earlier in the day, Environment Canada issued a wind warning for parts of the region that suggested high winds could cause damage.

The strong gusts arrived with an Arctic air mass expected to settle over the province for several days. The weather agency warned that wind chill values as low as -10 C are possible between Wednesday and the weekend, and overnight lows are expected to dip below freezing.

Elsewhere, the wind was blamed for power outages that impacted thousands of customers in the Lower Mainland, and closed some schools in North Vancouver.