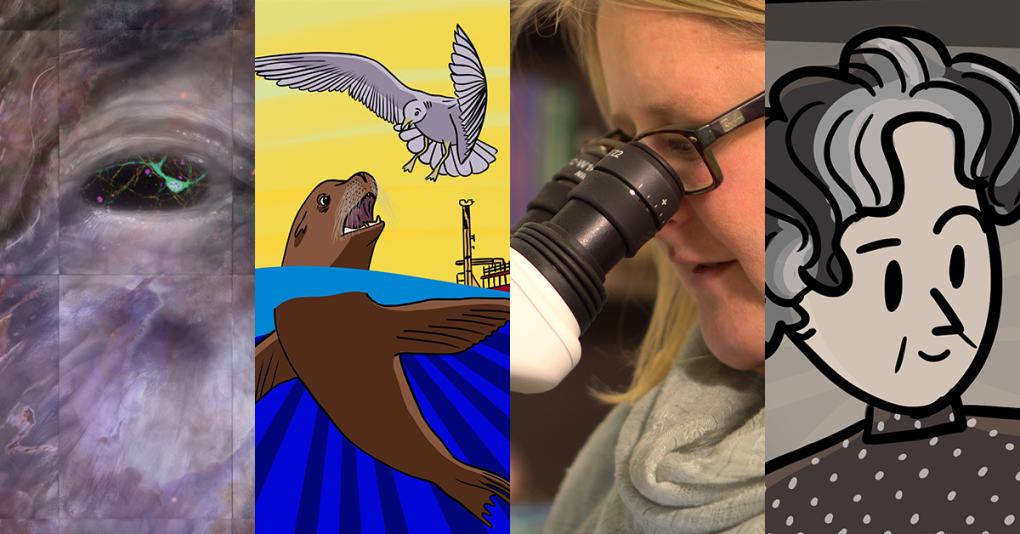 Stills from the four films are seen in this collage. (Curiosity Collider)

Canadian women have made countless contributions to the advancement of science over the years, but their stories are not often well-known.

This is the animating idea behind a new project that makes its debut Friday night at Vancouver Civic Theatres' Annex theatre on Seymour Street.

"Her Story: Canadian Women Scientists" is a series of short films created by local filmmakers, each working in collaboration with a Canadian female scientist.

The project is a creation of Curiosity Collider, a Vancouver-based non-profit organization that works to bring artists and scientists together.

Theresa Liao, community relations director for Curiosity Collider, told CTV News Vancouver the project came about as a result of conversations that happened after a previous exhibition.

Organizers realized few stories about women in science are being told in a video format in Canada, and they saw an opportunity for a future project.

"We didn't really find a lot out there," said Liao. "You search it on YouTube and, really, the number is, like, you can count it with one hand."

The goal is for "Her Story" to become an ongoing project. After the premiere event on Friday and a panel discussion on Saturday -- also at the Annex -- the four short films will be uploaded to the Curiosity Collider YouTube channel, where the stories they share will be accessible to anyone who wants to see them.

Part of Curiosity Collider's mandate is to pay artists for their work, so future additions to the project will likely depend on funding, Liao said.

"It comes down to, how much money can we raise?" she said.

The first four films were produced after a call for submissions, Liao said. Curiosity Collider asked filmmakers to submit proposals focusing on themselves and the work they like to do, as well as why they were interested in working with female scientists.

After selecting four filmmakers, organizers paired them with scientists, unless they already had a scientist in mind for collaboration.

"When we accepted submissions, we asked them, 'Is there someone that you already work with that you'd like to continue working with?'" Liao said. "We kind of like that. We don't want to intentionally break them up and then find another scientist, if they already have a working relationship."

The four resulting videos are each five to six minutes long. In each one, a scientist tells her story, as well as the story of a Canadian scientist who came before her. Each short film contains a mixture of live action, animation, and narration.

The four short films are:

"Mapping the Mind" by filmmaker Leslie Kennah in collaboration with neuroscientist Dr. Kimberly Girling, in which Girling tells her own story as well as that of 101-year-old Brenda Milner, whose work in neuropsychology paved the way for the contemporary understanding of the human mind.

"Ground Swell" by Avocado Video (Lucas Kavanagh and Jesse Lupini) in collaboration with coastal scientist Jessica Pilarczyk, in which Pilarczyk tells her own story and that of her mentor Jeanne Percival.

"Making Waves" by Michael Markowsky in collaboration with marine biologist Jade Shiller, who describes working with her role model Dr. Kathleen Conlan in the film.

"Irene Uchida" by Armin Mortazavi in collaboration with neuroscientist Samantha Baglot, who tells the life story of Irene Uchida, one of the most successful women in the field of genetics.

Liao said the project is especially valuable because of the generations of history it captures and the connections it helped foster between generations of female scientists.

"It seems like it's just four short videos, but the amount of effort and trying to connect people, and if you look at just like the connections people have formed through creating these videos, it's actually tremendous," Liao said.

More information about each of the films can be found on the Her Story website.