Shooting of Hells Angels member in Starbucks drive-thru was in exchange for cancelled debts: sentencing judge 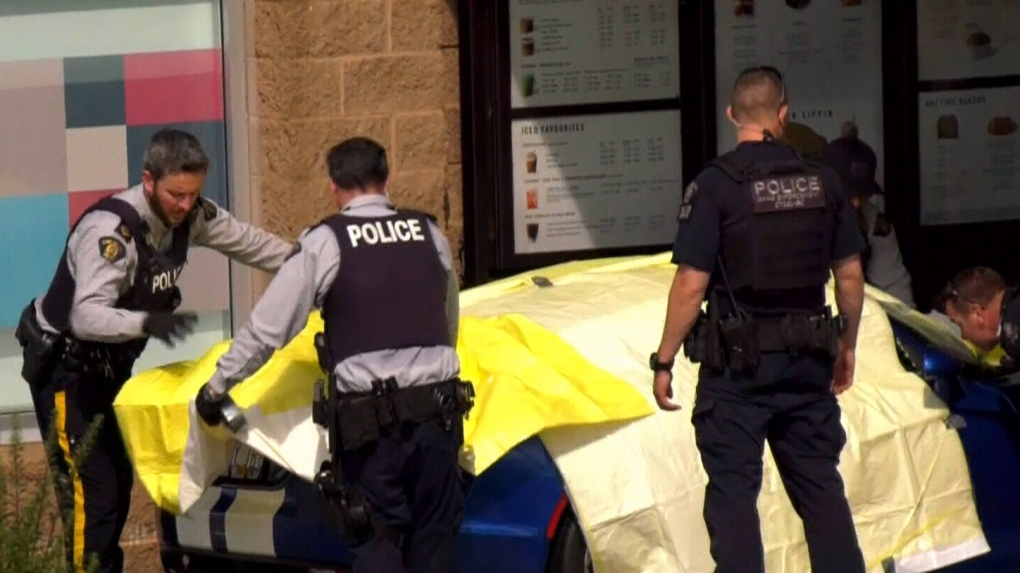 Two men who pleaded guilty to their roles in a fatal shooting in Surrey, B.C., have been sentenced to life in prison.

A court ruling posted earlier this week shows that Calvin Junior Powery-Hooker and Nathan James De Jong learned last month they will not be eligible for parole for 20 years.

The men, who were in their early 20s at the time of the offence, both pleaded guilty to second-degree murder in June.

According to a transcription of Justice Michael J. Brundrett's oral ruling, which was read in court in New Westminster on Sept. 10, both men said they were remorseful.

The charges stem from a shooting that occurred on Aug. 2, 2019, outside a Starbucks in Surrey. The victim had been in a Dodge Viper in the drive-thru at the time, and witnesses described seeing two masked men fire several bullets into the car.

Court documents showed that 12 shots were fired through the windows of the car as Suminder Ali "Allie" Grewal, 43, sat inside. He was fatally injured.

First-degree murder charges were announced against Powery-Hooker and De Jong the day after the shooting. Police did not say how they'd tied the men to the incident in such a short time, but court documents state that there was a "high-speed police chase," which ended with their arrests according to Justice Brundrett's ruling.

At one point, the SUV they'd used to flee the scene was clocked at a speed greater than 150 km/h, Brundrett said, noting reports suggested the driver had to swerve around vehicles and pedestrians, and ran multiple red lights before both men were caught.

According to the documents, the men who were charged had followed Grewal from his home before the attack at the Southpoint Exchange Mall drive-thru.

Both have been in custody since the time of their arrest.

They initially planned to go to trial and fight the charges of first-degree murder, but, following an evidentiary hearing, opted to plead guilty to the lesser offence of second-degree.

During sentencing, the court heard the men had been asked to kill Grewal in exchange for the forgiveness of debts. As for why Grewal was targeted, this information was not provided in court, the judge said.

According to the ruling, they intentionally obtained their getaway vehicle, two guns and blue gloves to use in the shooting, and they wore face coverings at the time. A jerry can of gas was found in the back of the car, the court heard, suggesting there may have been plans to burn the vehicle, as is often the case in gang-related shootings in B.C.'s Lower Mainland.

Among the factors considered in their sentencing, the judge said, is that Grewal was "unarmed and defenceless" at the time, and that the shooting was in a public place.

There was a significant amount of planning evident, he said, and their motive included financial compensation. Both have prior criminal records, and both fled police, putting more people in danger.

Still, the judge said, they did plead guilty, sparing the court and the public the high cost of a trial. He said they have "taken some steps to acknowledge the devastating harm they have caused," and have expressed remorse for their actions.

Second-degree murder carries an automatic life sentence in B.C., but parole eligibility varies. Lawyers on both sides suggested the men be ineligible for 20 years.

Describing the incident as a "public, cold-blooded execution of a man waiting in his car at a drive-thru Starbucks location on a sunny Friday morning," the judge said the murder was "particularly vile and shocking in its callous disregard for human life."

Ultimately, he agreed with the joint submission, and sentenced both Powery-Hooker and De Jong to life imprisonment without the possibility of parole for 20 years.

He also issued weapons prohibition order for both men for life.