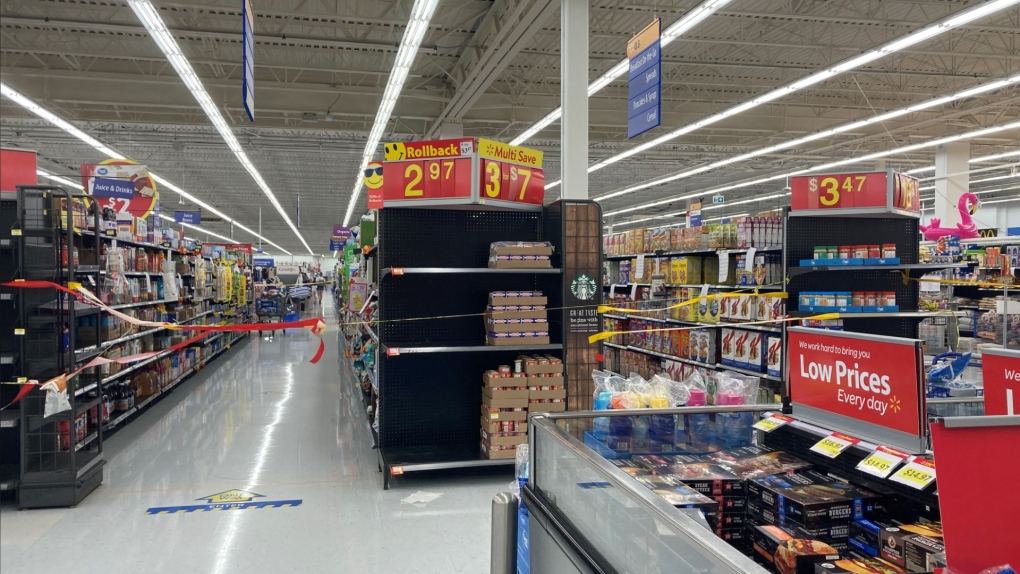 Several aisles in a New Westminster Walmart had to be closed starting on June 25, 2021, due to a "severe pest infestation."
Vancouver -

Aisles have been closed for several days at a Metro Vancouver Walmart after dozens of food packages were found chewed by rodents.

A routine inspection done at the New Westminster Walmart in Queensborough on Friday found a "severe pest infestation," the report filed by Fraser Health says. The report lists the hazard rating of the dry-food department as "high" and ordered it to be closed for deep cleaning.

The report details what the rodents chewed on including Cheetos, walnuts, rice, Chipits, soup mix, instant noodles and Crispers, among several other items. Staff were ordered to throw all those packages away.

Fraser Health's report also noted droppings were found in several areas, including around bags of pet food and on several food shelves.

Staff were told they must block off the affected food aisles, throw away all contaminated items, clean shelves with a bleach solution and have a pest control company come to the store.

A few days later, a follow-up inspection was completed, but the aisles had to remain closed. The report filed on June 29 says staff must take steps to prevent pests from entering the store, including sealing gaps between seasonal doors and sealing a hole found in a wall in the storage area.

Nine aisles must remain blocked off to customers until the preventative measures are finished, the report says. Pest control has been at the store twice each day and the latest report says no new pest issues were discovered except where more droppings were found near pet food.

The report says store employees have so far removed extra stock from the shelves, cleaned them and are checking food items twice each day.

Another inspection by Fraser Health is scheduled for July 9. It's unclear if the store will be able to reopen its food aisles before then.

Pfizer said Monday its COVID-19 vaccine works for children ages 5 to 11 and that it will seek U.S. authorization for this age group soon -- a key step toward beginning vaccinations for youngsters.

The search was suspended Monday in a Florida nature preserve for a man police say is a person of interest in the death of his girlfriend Gabriel 'Gabby' Petito, whose body authorities believe was discovered at a Wyoming national park the couple visited.

Canadians heading to the polls to choose next federal government

Canada's first-ever pandemic election culminates today as Canadians from coast-to-coast go to the polls to choose the 338 members of Parliament to sit in the House of Commons.

On CTVNews.ca, chief financial commentator Pattie Lovett-Reid shares her take on how investors can best react to a market pullback.

Warning of a potential new Cold War, the head of the United Nations implored China and the United States to repair their 'completely dysfunctional' relationship before problems between the two large and deeply influential countries spill over even further into the rest of the planet.