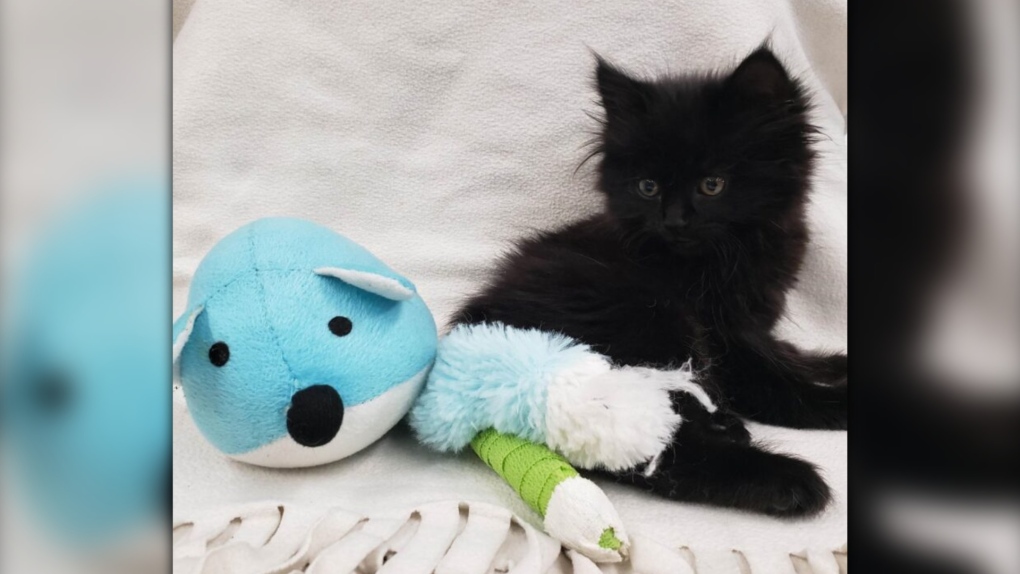 A seven-week-old kitten, Ivy, is recovering after being thrown out of a vehicle, according to the B.C. SPCA. (Handout)

VANCOUVER -- A seven-week-old kitten had to have her tail amputated after being thrown from a moving vehicle in Kelowna, B.C., according to the SPCA.

The animal welfare organization said the tiny black kitten was rescued Friday evening by a Good Samaritan who witnessed the incident from his car.

The man told the SPCA it looked like the kitten might have been run over after hitting the ground, which could explain some of the animal's injuries.

"He couldn't believe what he was seeing, but he pulled over to help," said Sean Hogan, branch manager of the Kelowna SPCA.

The man drove the kitten to the Tri Lake Animal Hospital, where veterinarians determined she had a fractured femur and potential head trauma. The animal's tail was also so badly injured that it had to be amputated.

"I'll try to be delicate, but basically the skin of her tail was scraped right off," Hogan said. "But kittens are incredible healers, that's the good news."

Staff at the animal hospital, who named the kitten Ivy, said it appears she will recover to live a healthy life. The SPCA estimates Ivy will be ready to be adopted out in six to eight weeks.

In the meantime, the veterinary bills are mounting. The SPCA has set up a fundraising page to help pay for the kitten's care, with an agreement from the Petsecure insurance company to match all donations up to $3,500.

Hogan also urged supporters to keep the SPCA's cruelty hotline – 1-855-622-7722 – in their phone in case they witness an animal being mistreated.

In Ivy's case, the Good Samaritan was unable to remember any descriptive details about the vehicle involved, leaving no investigative avenues for the SPCA's officers.

Hogan said the man did everything right by bringing the kitten to hospital and contacting the SPCA, but that the incident happened so fast he "just had no memory of what the vehicle was or the plates or anything."

Anyone with information on what happened can contact the B.C. SPCA.