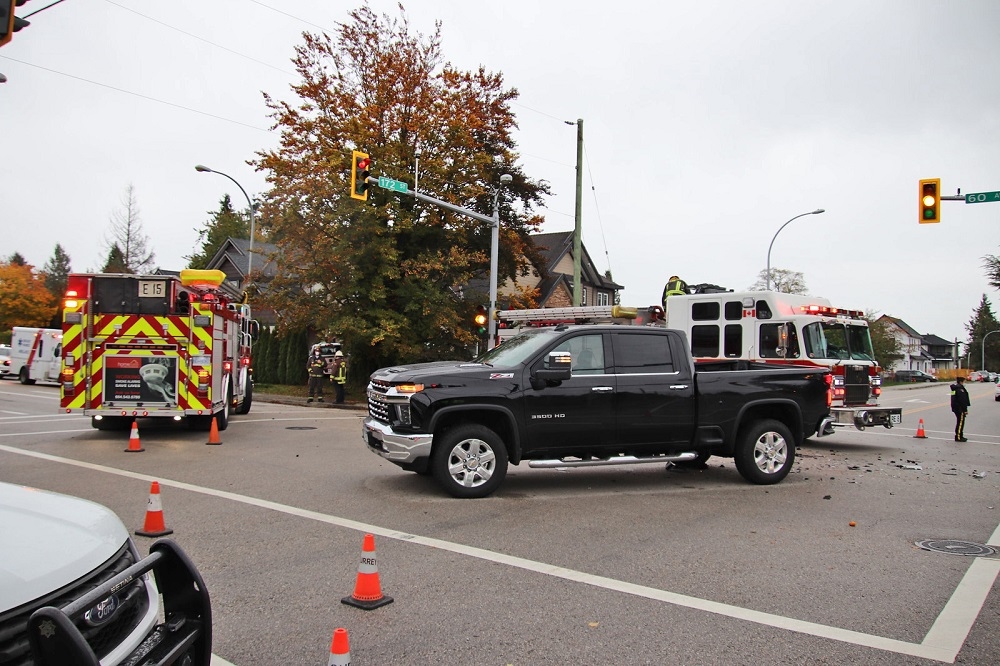 A serious crash in Surrey, B.C., on Oct. 24, 2021 closed the intersection of 60th Avenue and 172nd Street for multiple hours. (Shane MacKichan)
Vancouver -

A driver has been sent to hospital with serious injuries after a major car crash in Surrey.

According to Surrey RCMP, the crash happened around 9:30 a.m. on Sunday when two vehicles collided at the intersection of 60th Avenue and 172nd Street.

“(A) male driver from one vehicle was transported to hospital with serious injuries, the occupants of the other vehicle were shaken up and ... checked at the scene by BC Ambulance service,” reads a statement from Sgt. R.R. Monsef.

The intersection was closed to traffic after the crash. Photos from the scene show two pick-up trucks were involved in the crash. One is sitting in the middle of the intersection and surrounded by debris while the other appears to have gone off the road and into a nearby yard.

“Road closure will be in effect for several hours and the public is asked to use an alternate route at this time,” continues the police statement.

The integrated collision analysis unit has been called to assist the Surrey RCMP’s criminal collision team with the investigation. Anyone with information about the incident or dashcam footage is asked to contact the Surrey RCMP at 604-599-0502.