Section of Highway 1 reopens to all vehicle traffic after B.C.'s historic flooding 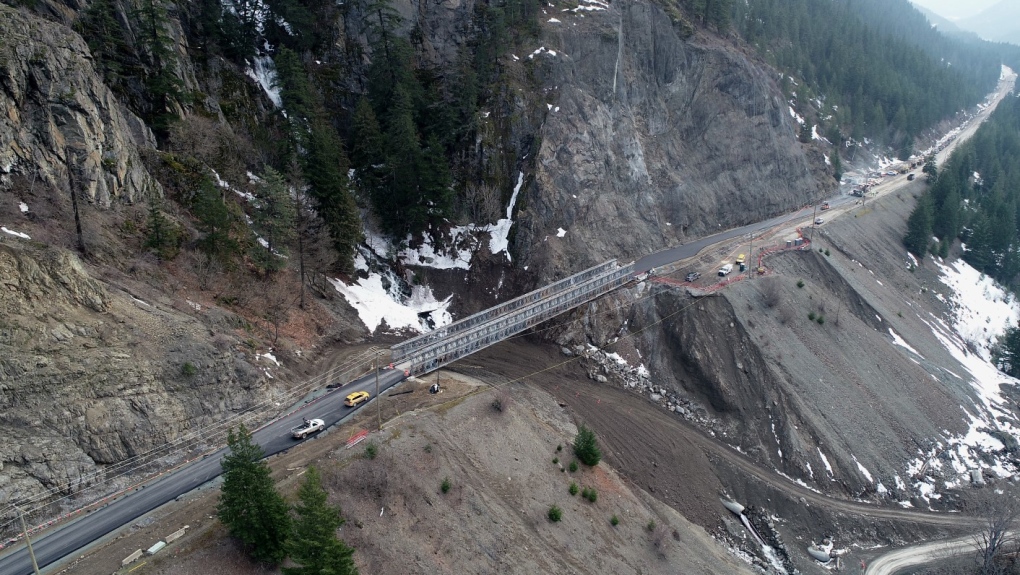 Highway 1 through the Fraser Canyon reopened to all vehicle traffic Monday afternoon, but drivers are being told to expect delays of up to two hours or more (Province of British Columbia/Flickr).
VANCOUVER -

Highway 1 through the Fraser Canyon reopened to all vehicle traffic Monday afternoon, but drivers are being told to expect delays of up to two hours or more.

The Ministry of Transportation said the reopening marks another "major milestone" in B.C.'s recovery from November's record rainstorms that brought devastating floods and mudslides to the South Coast.

Transportation Minister Rob Fleming credited crews and staff who have been working around-the-clock to reopen the major artery connecting the Lower Mainland to B.C.'s Interior and Northern regions.

"The construction and engineering accomplishments to get people and goods moving again after the highway sustained such heavy damage are nothing short of remarkable," said Fleming in a news release.

The repairs to the highway were completed despite a blast of winter weather bringing "record snowfalls, avalanche risks and cold temperatures" to the area over the past few weeks, officials said.

However, drivers are being warned of heavy delays along this stretch of the highway due to ongoing repairs and sections of single-lane alternating traffic.

Officials said drivers can expect congestion at the temporary single-lane bridge at the Jackass Mountain and Nicomen River crossing, which was installed where a large section of a two-lane road was destroyed.

"Because this bridge is in a known avalanche zone, drivers will have a pilot-car service for approximately four kilometres to guide them through this section," the Ministry of Transportation said.

Officials added that because the avalanche risk in the Fraser Canyon is also high this time of year, drivers should expect closures on short notice for avalanche control and clean-up efforts.

The Ministry of Transportation is urging anyone travelling along the highway this winter to plan accordingly, with warm clothing, food and water, and a full tank of gas.

Last week, another section of Highway 1 between Kanaka Bar and Spences Bridge reopened and Fleming said he expected the highway to "reopen to all vehicle traffic before the end of January."

Queen Elizabeth II made a surprise visit Tuesday to a train station in central London to see a newly completed subway line named in her honour. The 96-year-old monarch, who has reduced most of her public engagements, appeared Tuesday at Paddington Station.

Toronto Maple Leafs winger Mitch Marner was the victim of an armed carjacking outside a movie theatre in Etobicoke on Monday night, multiple sources confirm to CP24.

Efforts were underway Tuesday to rescue the last of the defenders inside the Azovstal steel plant in the ruined city of Mariupol after Ukrainian officials said the fighters had 'completed their mission' and there was no way to free the plant by military means.

Twitch, a live-streaming giant, comes under scrutiny after Buffalo shooting

Twitch, the livestreaming giant popular among video gamers, has been thrust into the national spotlight after the suspect in the Buffalo grocery store mass shooting tried to broadcast the attack on the platform.

Gasoline prices are showing no signs of letting up as the average price in Canada tops $2 a litre for the first time. Natural Resources Canada says the average price across the country for regular gasoline hit $2.06 per litre on Monday for an all-time high.

Next steps for Finland, Sweden on NATO membership

Finland and Sweden have signalled their intention to join NATO over Russia's war in Ukraine and things will move fast once they formally apply for membership in the world's biggest security alliance.