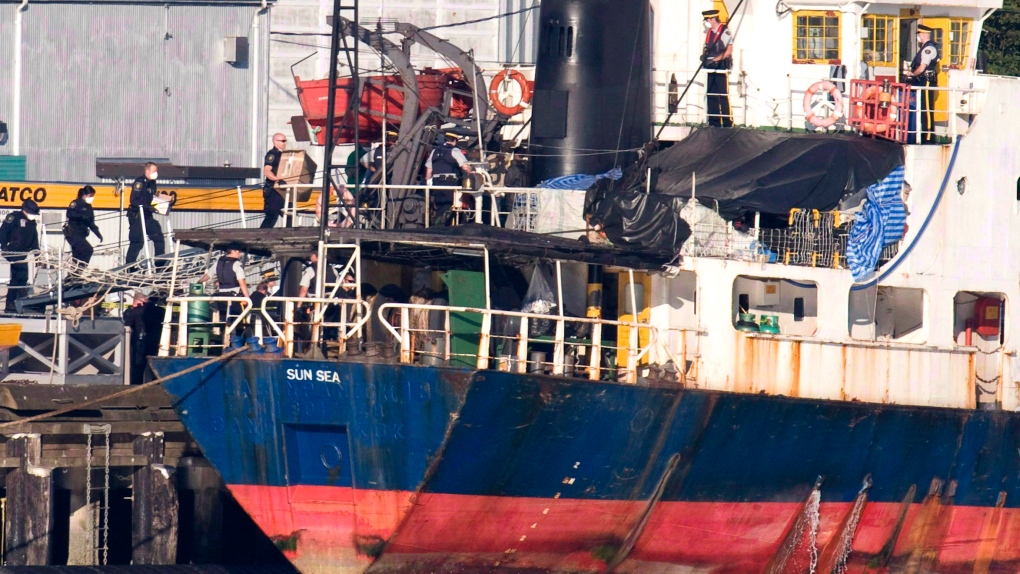 Police and military personnel wear surgical masks as they board the MV Sun Sea after it was escorted into CFB Esquimalt in Colwood, B.C. on Aug. 13, 2010. (THE CANADIAN PRESS / Jonathan Hayward)

Another migrant from the MV Sun Sea whom Canada sent back to Sri Lanka was detained on arrival and has since lost touch with his family and lawyer, according to a court document obtained by CTV News.

The man, who can only be identified as B005, was not suspected by the Sri Lankans of being involved in any terrorist or criminal activities but was arrested anyway, wrote federal court justice Sean Harrington in a judgment that could throw a wrench in plans to deport other Sun Sea migrants.

“Allegedly, B005’s whereabouts is still unknown, or he is being held incommunicado,” Harrington wrote on Sept. 6.

That’s despite a Sri Lankan magistrate ruling that B005 was “not involved in any… terrorist activity or any other criminal offenses,” Harrington wrote.

According to the judgment, Canadian officials in Sri Lanka are only aware of two people who were deported after arriving in Canada on the MV Sun Sea, which came to Canada in 2010 with about 500 ethnic Tamils fleeing a lost civil war in Sri Lanka.

Harrington says B005 appeared well-treated when he was visited by Canadian officials when he arrived in September and again in October of 2012, a fact shared by representatives of the Canadian government here in Canada at refugee hearings for other passengers on the ship.

However, the other migrant, Sathyapavan “Sathi” Aseervatham, was also detained for about a year and claimed he was tortured and beaten with plastic pipes and denied food and water. Sathi was later among those charged in Canada with organizing the MV Sun Sea’s voyage, and died in a car accident a few weeks ago.

Harrington wrote that Canadian officials knew of both cases but did not share the allegations of torture with some refugee protection hearings in Canada.

“As to B016 (Sathi), there is a sworn statement from him that he was beaten and tortured for over a year. He does not say why he was held. Again, this was not before the RPD (refugee protection division) but is said to have been put before the RPD in other cases,” he wrote.

“At a bare minimum, if the Minister chooses to disclose evidence, that disclosure must be complete,” he wrote.

“No way should a minister take a position of secrecy,” Cannon said. “It’s the Canadian government’s fault that the evidence was known to them and not disclosed.

“I’d be willing to talk to clients who are looking at being sent back. Every single refugee claim could be reopened because of a breach of natural justice,” he said.

As of the end of September, 117 people on the MV Sun Sea have been accepted as refugees, 117 people have had their claims rejected, and 23 claims have been withdrawn. Many are still pending. Two migrants remain in Canadian prison.

The CBSA did not comment on the case, except to say that 120 people were removed to Sri Lanka in 2012.

Representatives of former immigration minister Jason Kenney and public safety minister Steven Blaney did not respond to questions about B005.

Reached at a press conference Tuesday Jason Kenney told CTV News he was not aware of any mistreatment of Canadian deportees in Sri Lanka.