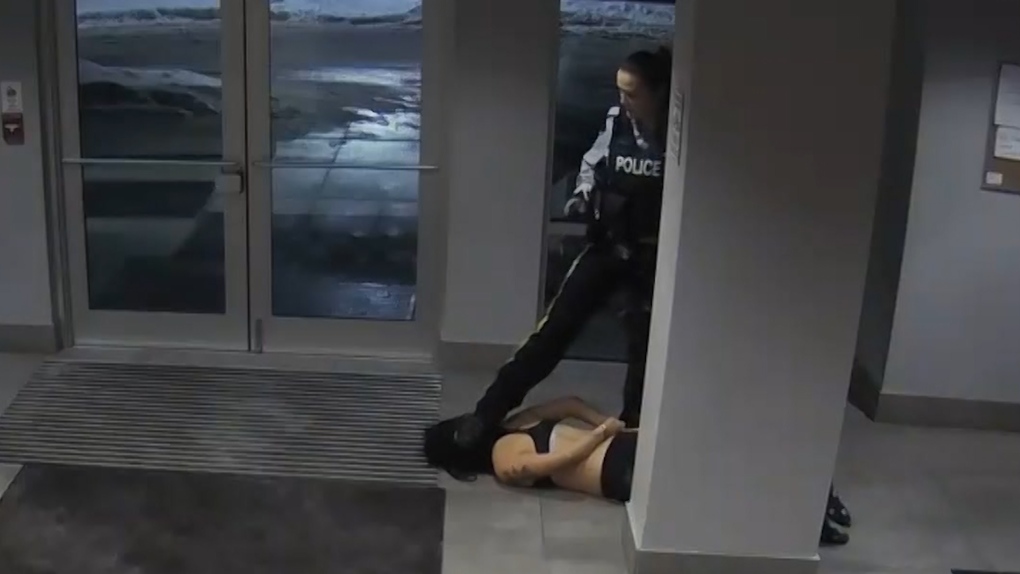 VANCOUVER -- A second lawsuit has been filed against the Kelowna RCMP corporal accused of dragging and stepping on a UBC nursing student during a wellness check earlier this year.

The claim alleges that Browning assaulted the plaintiff, Fiona Louise Read, while she was walking home after a New Year's Eve party on Jan. 1, 2016.

Read's claim states that she had planned to spend the night at the home of some friends who live next door to where the party was being held. Near the end of the party, she became uncomfortable and decided she would rather go home that evening.

According to court documents, Read went to her friends' house to gather her things, leaving her keys and car at their place and planning to walk home. Her friends tried to convince her not to leave, which made her more uncomfortable.

While she was on her way home, Read encountered an RCMP cruiser that stopped in the middle of the road, according to her claim. She approached the vehicle, believing she was "in need of protection" and that police should investigate why her friends didn't want her to leave.

The officer got out of the car and asked if Read's name was Fiona. When she confirmed that it was, the lawsuit alleges, the officer - who Read now knows was Browning - "grabbed her by her hair and pounded her head into the ground multiple times."

The claim goes on to state that Read "suffered injuries and was unable to stand or be supported by her right knee." The knee injury was so severe, the suit alleges, that it forced Read to permanently quit running and skiing.

According to the lawsuit, the RCMP did not allow Read to be treated by paramedics and detained her for more than six hours without explaining why.

Browning eventually recommended Read be charged with resisting arrest and assault, but the Crown did not approve any charges, according to the claim.

The claim also alleges that Browning's supervisor refused to accept a formal complaint from Read when she attempted to make one on the day after the alleged assault. The supervisor "advised the plaintiff that the actions by Browning were justified," the lawsuit reads.

"As a direct, foreseeable and proximate result of the RCMP and Browning's unlawful actions, the plaintiff has suffered emotional distress, humiliation, shame and embarrassment," the claim reads.

As of Thursday, the defendants have not responded to Read's claim. B.C. RCMP spokesperson Staff Sgt. Janelle Shoihet told CTV News in an email that Mounties had not been formally served the claim as of Thursday evening.

"Typically what happens is that, once served, the civil matter will be reviewed and addressed by the Department of Justice through the normal civil processes," Shoihet said in her email. "The allegations are also being reviewed to determine if there are any other actions that need to be taken."

This is the second civil claim filed against Browning in the last two months.

Last month, nursing student Mona Wang filed a similar lawsuit against Browning, alleging the corporal assaulted her during a wellness check on Jan. 20 of this year. Surveillance video of that incident shows an RCMP officer pulling Wang, who is not wearing a shirt, down the hallway of her Kelowna apartment building.

At one point in the video, the officer is seen putting her boot on the nursing student's head. She's also seen pulling Wang's head up by the hair, then lowering it back to the ground.

"Once they have completed their review, and if there are no other investigative requirements, the materials will then be sent to the BC Prosecution Service for charge assessment," Shoihet said in her email.

"The internal Code of Conduct investigation is also continuing and a public complaint has been received," Shoihet continued. "The police officer remains on administrative leave, and their duty status is subject to continual assessment."

In their response to Wang's civil claim, the defendants say the officer's actions were "reasonable, lawful and executed in good faith," and that the use of force was necessary.

None of the allegations in either of the lawsuits has been proven in court.

The full text of Read's claim is embedded below.