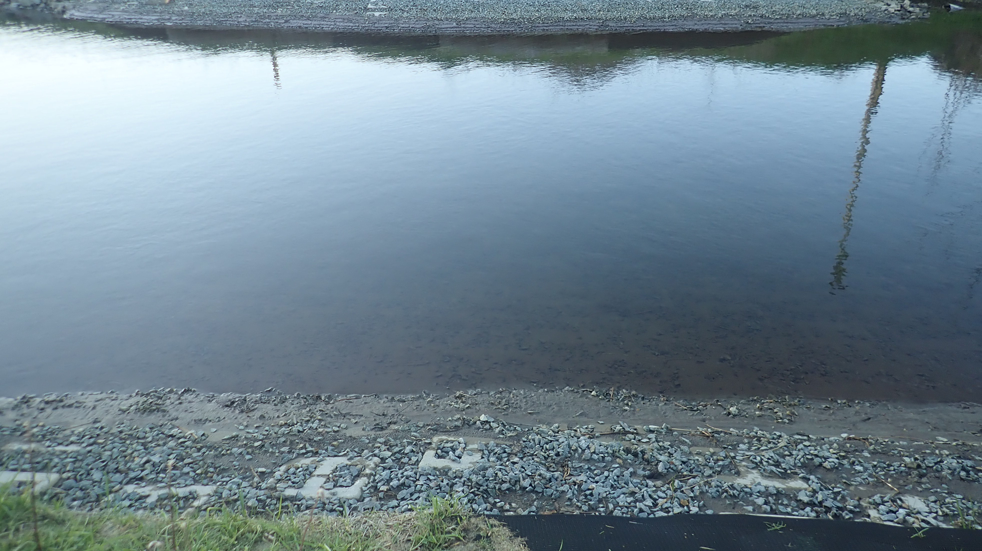 The Trans Mountain pipeline crossing in Stewart Creek in Chilliwack, B.C., on Dec. 12, 2018 in this handout photo. THE CANADIAN PRESS / Mike Pearson

VANCOUVER - Work on a Trans Mountain pipeline crossing in a British Columbia stream altered habitat for young salmon, but the creek is expected to return to normal in one to two years, says Fisheries and Oceans Canada.

Two biologists with the department visited Stewart Creek in Chilliwack on Jan. 30 after receiving a complaint from Mike Pearson, a biologist with 30 years of experience who raised concerns about the work done by Trans Mountain Corp.

Pearson said in January that the placement of 17 metres of articulated concrete mats at the bottom of the stream had reduced hiding places for coho and chum salmon and inhibited growth of the aquatic invertebrates they feed on.

The Fisheries Department said the habitat has been altered but the natural accumulation of sediment is expected to restore the salmon habitat.

"The stream bed in the vicinity of the works has been altered from soft sediment bottom to hard substrate as a result of the placement of the concrete articulated matting for protection of the pipeline," it said in a statement.

"Pre-existing habitat conditions are likely to be fully established within one to two years. However, monitoring of the site should be undertaken by the proponent to ensure that the habitat functions effectively."

The department believes it's unlikely salmon have been affected by the temporary alteration, as similar rearing habitat exists upstream and downstream of the site.

Pearson said while it's true the work covered a small area, it raises concerns about the ability of Trans Mountain to build infrastructure through waterways if the expansion project proceeds.

"The standard of work there is low, very low, in terms of habitat," Pearson said. "The cumulative effects of hundreds and hundreds of these (crossings) is not trivial."

The project was purchased by the Canadian government for $4.5 billion and would triple the capacity of the existing Trans Mountain pipeline by laying nearly 1,000 kilometres of new pipe from the Edmonton area to a marine shipping terminal in Burnaby, B.C.

Pearson also doubted that enough sediment will accumulate at the site to cover the cement, and therefore maintains that the alteration to the stream bed is permanent, not temporary.

Sediment collects in places where water slows down, but that part of the creek is shallow and the current moves quickly, he said.

"Habitat is about a lot more than sediment," Pearson added. "There's no cover. The banks are peeled back with concrete going right up the banks. The sediment is not what I would be most fixated on."

Fisheries and Oceans said it's not contemplating further action at this time. It added that new vegetation planted post-construction will help avoid recolonization of an invasive plant species called reed canarygrass and improve fish habitat once it's re-established.

Trans Mountain said it agrees with the assessment by the Fisheries Department and will continue to monitor the site.

"Trans Mountain relies upon highly qualified professionals to design and implement solutions that are effective and compliant," it said. "From an engineering and habitat perspective the Stewart Slough crossing is functioning as designed."

Gravel was used to fill in the open-celled concrete blocks in order to hasten accumulation of material such as fine sand, silt and organics by natural accumulation and restore the habitat to its pre-construction condition, it said.

The company has denied an allegation by Pearson that photos he took in December show that small stones the company placed over the concrete blocks have been swept away by currents.

It said when construction was completed in September, the expectation was that it would require a period of sustained high-water levels and flows to allow the accumulation of material.

Last month, the National Energy Board recommended the government approve the expansion project after reviewing the effects of increased tanker traffic on the marine environment.

The board found that the project was in the public interest despite likely "significant adverse effects" to endangered southern resident killer whales and Indigenous cultural practices related to the animals.

Southern residents primarily eat chinook salmon during May to August, but chum salmon is an important component of their diet from September to October, according to Fisheries and Oceans Canada.

The energy board also concluded in its report last month that Trans Mountain's approach to the design of watercourse crossings is in keeping with current industry standards and practices.