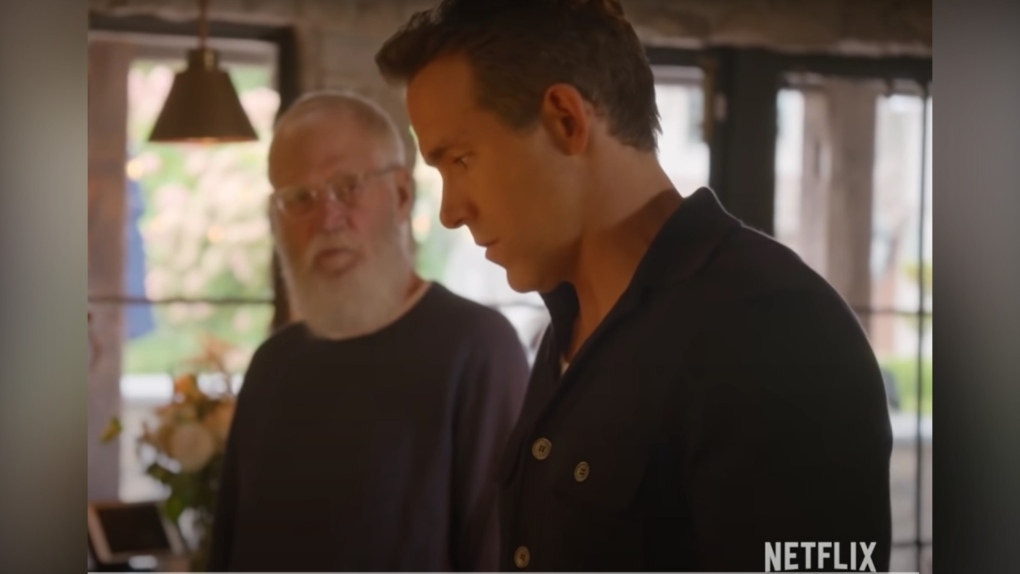 This screenshot from David Letterman's Netflix show "My Next Guest Needs no Introduction" Ryan Reynolds being interviewed in his home.

Ryan Reynolds shared some of what it was like growing up in Vancouver in a new interview with David Letterman this week, including the fact that he said he was going out to get gas when what he was really doing was moving to Los Angeles.

Appearing on Netflix's "My Next Guest Needs No Introduction" Reynolds touched on his stint working at a Safeway, what it was like growing up as one of four brothers and how he thought his home country compared to the U.S.

"As a kid I was looking at Americans as this big, shiny pair of pants down south, and Canada was this little hat," he said.

Reynolds moved out of his parents' home when he was 17 and went to live with his brother. He told Letterman his father wanted him to go to university, something he did when he was 18 to try to please his dad.

"I went for – I'm not even making it up – 45 minutes," Reynolds said, adding that was the day he decided to head south.

His first moments in the new city didn’t go quite as he'd imagined, he told Letterman.

"I got outside the Highland Gardens hotel and got my bags out of my jeep went inside, came back out my jeep was gone – already. Like Welcome to Los Angeles. I found it two blocks away. They stole my doors."

Ultimately he got an agent and was cast in a sitcom, which set him off on the path to the success he enjoys today.

But he said he always had a Plan B.

"If this all ignites in a glorious flame of failure, I can still drive my door-less Jeep back to Vancouver," he recalled saying to himself in his early days in Hollywood.

The interview was done in Reynolds' home, where he lives with his wife Blake Lively and their three daughters. Being the only man in an all-female household is almost the exact opposite of how he grew up.

Reflecting on his childhood, he talked about his relationship with his brothers. While there were what he described as "bare-knuckle brawls" on the lawn, the siblings were close and supportive.

"There were times of real darkness. But I think I found those slivers of light, I think my brothers did too. I think we had each other," he said.

One story he shared was about how he got an earring when he was 12. Reynolds described his dad as "very tough, very very tough on us." When he told his siblings about his plan they told him how they thought his father would react.

"My brother said you're going to die. You're going to show up at dinner tonight. And there will be a messy stabbing death because dad will take one of the utensils and stab you," Reynolds told Letterman.

Undeterred, Reynolds got his ear pierced and showed up at the dinner table that night, prepared to face his punishment.

"I kind of look up, and I look around and I see that all three of my brothers had gotten an earring to sort of save me," he recalled.

"It's one of the most beautiful things I've ever seen in my life. I remember looking around and my mom just, looked like she was about to faint. My brothers just were really trying to protect me in the moment.

Canada will be sending more troops to Latvia as part of a pledge to upgrade and strengthen the NATO battlegroup it is leading there, Prime Minister Justin Trudeau said on Thursday.

The Supreme Court of Canada has upheld expansions to Canada's rape shield laws made by the Liberals four years ago.

Canada plans to require that companies add nutrition warnings to the front of pre-packaged food with high levels of saturated fat, sugar or sodium.

WHO: COVID-19 cases rising nearly everywhere in the world

The number of new coronavirus cases rose by 18 per cent in the last week, with more than 4.1 million cases reported globally, according to the World Health Organization.

Russian President Vladimir Putin shot back at Western leaders who mocked his athletic exploits, saying they would look 'disgusting' if they tried to emulate his bare-torso appearances.

Russia forces withdrew from a strategic Black Sea island Thursday after relentless Ukrainian attacks but kept up their push to encircle the last stronghold of Ukrainian resistance in the eastern province of Luhansk.