'Run like your hair is on fire,' Mountie tells women 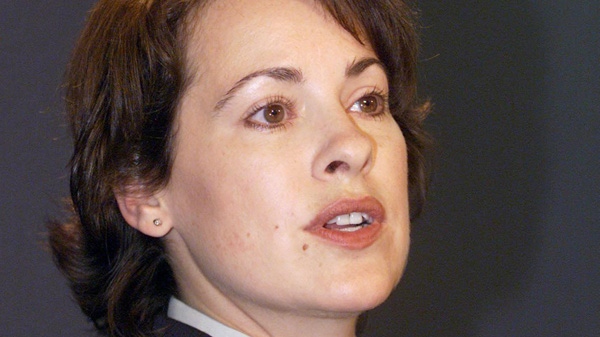 Cpl. Catherine Galliford is shown answering a reporters' question during a media briefing in Vancouver on Thursday, Sept. 19, 2002. Galliford says the RCMP is accountable to no one for the treatment of its employees and a union or similar organization is needed to protect them from a culture that is badly broken. (Richard Lam / THE CANADIAN PRESS)

A female British Columbia Mountie who was the force's public face for some of its most high-profile cases says the RCMP is accountable to no one for the treatment of its employees and a union or similar organization is needed to protect them from a culture she describes as badly broken.

Cpl. Catherine Galliford, who was the spokeswoman on the Air India and Robert Pickton investigations, says she spent years being treated as a potential sexual plaything by some supervisors, being called "baby" and repeatedly propositioned.

She said in an interview she finally broke because she had no where to turn to for help. A union, or something similar, could have helped and could drag the militaristic policing organization into the present, she said.

"You've reached your breaking point. You're being harassed to death. There has to be a group, a body to go to," Galliford said in a telephone interview.

Galliford said she experienced six to 10 incidents of harassment or sexual harassment, including one occasion in which a superior showed her his genitals and asked if a mole on his penis was "cute."

During the investigation into serial killer Robert Pickton, Galliford planned to watch a sex-themed documentary television series that someone believed Pickton had appeared in briefly.

The same male superior repeatedly asked her when she was going to be viewing the series, she said. Galliford refused to tell the colleague, but she said he kept track of her calendar on the office electronic datebook and he showed up anyway.

Earlier, during the Air India investigation, she said she was dragged along on pointless trips to Eastern Canada to meet with victims' families. She said there was no news to impart, but her superior used the road trips as an opportunity to try to have sex with her.

"I was not prepared for the harassment in the workplace. I kept on waiting for it to end and it didn't end," she said.

"There wasn't a lot that went through my mind, because I think that female police officers start to normalize that type of thing within the workplace. It almost becomes normal, and I don't know what a shrink would say about that, but I just started to normalize the harassment."

Most municipal forces have unions, but RCMP officers are prevented by statute from organizing one.

Galliford has spent four years off the force, battling demons that have included post-traumatic stress disorder and, for a while, a drinking problem. She has now filed a 115-page internal complaint.

The RCMP has not responded directly to Galliford's internal complaint, but said in a statement earlier this week that sexual harassment is not tolerated in any way.

Mike Webster, a former RCMP psychologist who is now in private practice, said he has several RCMP officers in a support group he runs who have been on paid leave for four years.

"The record in the country is 13 years," said Webster. "The record in this division, E-Division (British Columbia), is 11 years. Eleven years off work, being paid. It's crazy."

"Females don't have anywhere to go, so they end up turning to a lawyer and they can't go back to the workplace because that's where this abuse took place, so what do they do, they flee into this unlimited sick time," he said.

"This ridiculous thing that the RCMP has enshrined in the RCMP Act, where they have unlimited paid sick time."

Webster said other similar organizations such as city police and fire have unions that act for the complainant, whose rights are protected by a collective agreement. Sometimes, he said, the complaint can be completed in days to the agreement for everyone.

In July, the RCMP Commissioner acknowledged there is a systemic problem with the Mounties' grievance process, including the length of time it takes and the impact it has on members and morale.

Tom Stamatakis, president of the Canadian Police Association, said there are half a dozen safeguards within union processes that create levels of accountability.

He said there are few cases that would ever last as long as Galliford's.

"We just don't have sick plans that allow for someone to be off as a fully paid employee for that period of time," he said. "It doesn't make sense."

Stamatakis doesn't know Galliford, but, as the president of the Vancouver Police Union, he's worked on harassment cases in the past.

He said it's unfortunate she felt there wasn't anywhere to get help.

"Because, unfortunately, with issues related to workplace harassment, sexual harassment, usually if there's not an intervention right away the longer things go on unresolved then the more difficult they are to deal with, but also to recover from."

A section of the RCMP Act prevents the RCMP from having a unionized force, but that was struck down by an Ontario court in 2009. The Ontario Court of Appeal granted the federal government a temporary stay on the ruling and the court will review the decision in a few weeks.

Before the last federal election, the government tabled a bill that would give Mounties the right to form a union, but it wasn't passed before the election was called.

There's no word on whether the legislation will be revived.

"The RCMP is very concerned with the health and welfare of its employees and ensuring safe and timely return to work," Supt. Kevin DeBruyckere of the RCMP said in a statement.

He said employees have access to comprehensive care, and he said the RCMP has a proactive peer-based member-employees assistance program of trained employees for support.

"The RCMP is clear in its approach to harassment. It is not tolerated."

Stamatakis said one of frustrating problems for many RCMP officers is if they have a dispute with their employer, their employer is the ultimate adjudicator of their complaint.

In a union environment, that would be different, he said.

"It doesn't necessarily mean you always get the outcome you're looking for, but at least somebody from outside the organization has had a look at it and judges it on the merits."

Webster said he is already seeing the impact of Galliford's bravery.

He said current and former RCMP members have called his office to say they've gone through similar circumstances and want like to support Galliford.

"Catherine is very courageous to step out and do what she's done here."

But Galliford said she wouldn't recommend any woman opt for a career in the RCMP.