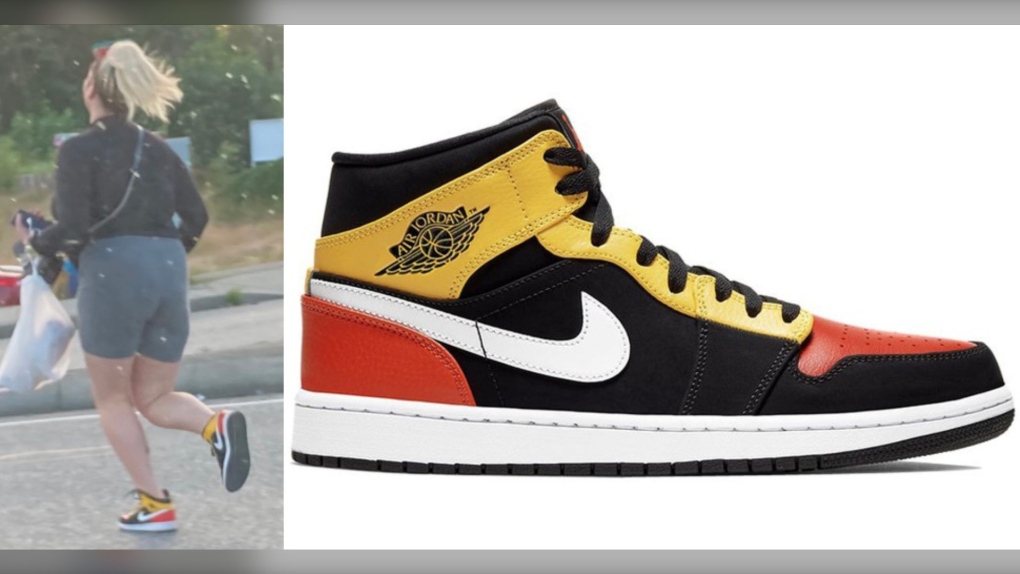 Photos provided by the RCMP show a female pedestrian and the Nike shoes she was wearing at the time.

VANCOUVER -- Police are asking the public if they recognize a colourful pair of shoes following reports of a road rage incident in Port Coquitlam, B.C.

The RCMP said the incident was reported on the evening of July 4. Mounties were told two women got into an altercation at the intersection of Lougheed Highway and Shaughnessy Street.

"Obviously we're only getting one side of this story," police said in a statement Monday, but it was reported by a passenger in a car that two female pedestrians "gave her the finger."

One of those pedestrians is then alleged to have punched the passenger through an open window.

The woman who said she was punched took a photo of one of the pedestrians as she ran away, police were told.

The suspect's back is turned, but her shoes are distinct and may be recognized.

Mounties are looking to speak to the pedestrians to get their side of the story.

"Coquitlam RCMP investigators have an open mind and what to hear her side of the story," Mounties said in a statement.

They're also looking for witnesses to the event, and those who might know who the pedestrians were.

The pedestrian in the photo is described as possibly white and maybe in her late teens. She's of "medium height," the RCMP said, with long blonde hair and dark roots. Her hair was in a ponytail on the evening of July 4.

She was wearing grey shorts and a long-sleeved black top, as well as a pair of colourful sneakers. Police say the shoes are yellow, red and black Nike Jordan AJ1 Mids.