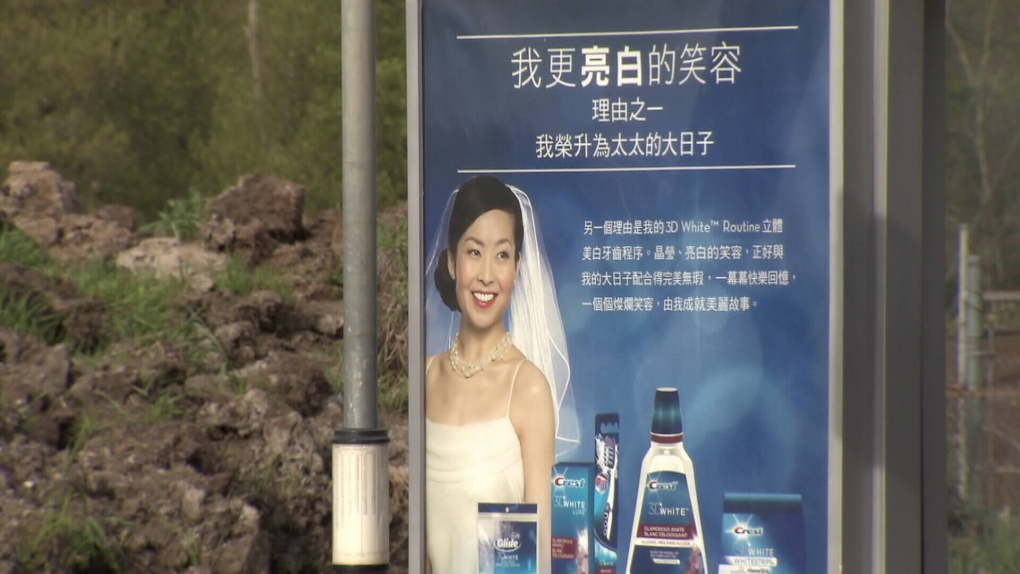 The City of Richmond has included an English language provision in its contract with advertising agency Pattison Outdoor. (CTV)

RICHMOND, B.C. -- A Vancouver-area city where nearly half the residents identify as ethnically Chinese is requiring that all bus-stop ads be at least 50-per-cent English.

Richmond signed a contract earlier this year with advertising agency Pattison Outdoor, and it includes a provision ordering all foreign-language ads to be half in English in terms of space, font size, content and detail.

The contract came into effect on Aug. 1, about two years after the city backed down on a controversial proposal to impose the same English-language requirements on business signage.

Richmond Mayor Malcolm Brodie said the idea for language regulations at bus stops came out of those discussions.

"When it came time to renew the contract we inserted into the request for proposals and ultimately into the contract the provision that there had to be at least 50 per cent English on all the signage on the bus shelter," he said in an interview.

There was little controversy over the bus-stop signage, Brodie said, adding it was relatively rare for an advertisement to be written only in Chinese.

Brodie said he's not aware of any other signage that falls under the city's control.

According to the 2011 census, nearly 50 per cent of Richmond residents identify as having Chinese ancestry and 40 per cent report speaking Chinese as a first language, whether it's Cantonese, Mandarin or another dialect.

That's compared to 36 per cent of residents who identified English as their mother tongue.

Discussions over whether business signs in Richmond should be required to include English faltered over concerns the law wouldn't comply with a charter right to freedom of speech.

"The results have been pretty good," he said. "And frankly it was only a small percentage of the total signage in Richmond that was affected in that way in the first place."