It was instantly noticeable: the palpable sense of relief at Rogers Arena last night that the sold out concert by English singing sensation Sam Smith was even happening. Having cancelled the Seattle date only two days beforehand (the reason, according to Smith’s personal facebook page, being that “my voice has given in”), the relaxed atmosphere around the arena was interrupted only by the array of extended arms on selfie duty, recording their owners’ attendance where it had seemed unlikely 48 hours earlier.

It turns out there was little need for worry. The lights dimmed and two sets of curtains dropped to reveal Smith stood atop a ten-foot podium, hitting every note of Adele-sized ballad “Life Support.”

“Vancouver! How you doing?” he beamed, his smile reflecting the genuine joy at having gone from unknown to playing full arenas in a mere 18 months. “When I came into this room for soundcheck I couldn’t believe how big it was.”

Life certainly has taken an interesting turn for Smith, whose between-song banter didn’t shy away from addressing his career’s meteoric rise. Having yet to develop the swagger of a seasoned front man, his stage persona remained more confessional than conceptual.

“Because of you fans I’m sh*tting myself, because I have to go to the Grammys on Sunday!”

Taking the place of panache was the voice, a flawless river of velvet cascading over self-penned ballads of rejected love like “Leave Your Lover,” “I’ve Told You Now” and “Nirvana.” If Smith’s voice was still recovering from its mini-meltdown on this, the last date of his North American tour, how powerful would it be when he’s 100% game ready?

The up-tempo numbers didn’t receive quite as rapturous receptions. “Like I Can” got everyone up and swaying, but Smith’s dance suggestions on “Restart” failed to generate much movement in a crowd either hemmed in by seating or reluctant to lose their space on the crowded arena floor.

Reemerging on stage with piano player Reuben James, Smith explained how he wrote his album after falling for someone who couldn’t love him back (“It was good for my career, not good for my heart”) before delivering raw versions of “Good Thing” and “Lay Me Down.”

Aside from Smith’s uncanny ability to shift from his natural voice to falsetto and back again, the most notable aspect of his concert was his repeated use of non-gender specific pronouns when discussing the ill-fated relationships that inspired his song writing. It was only midway through his encore, introducing “Make It To Me,” that he finally opened up; the honesty of his words echoed by a huge roar of approval.

“I want this song to be a love letter to my first boyfriend, whoever he may be.”

The show finished, inevitably, with “Stay With Me,” the biggest wallop of a night full of emotional body shots.

The guy is one album into a career and he’s already slaying sold out arenas. The ballad is officially back. 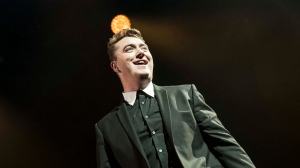