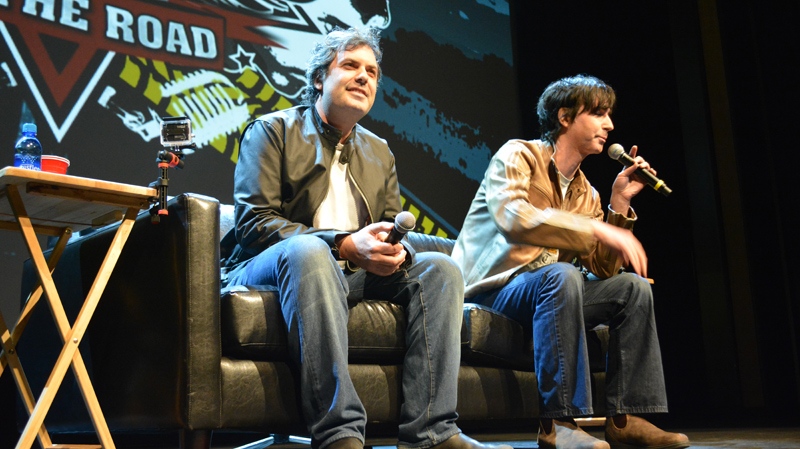 Kenny vs Spenny vs Canada Tour at the Vogue Theatre on March 31, 2014. (Courtesy Robert Collins)

In terms of reality TV, Kenny vs Spenny hasn’t crossed over into the mainstream quite like The Kardashians. But for the show’s fans, its blackly comic battles of wills are subversive morality plays; the Machiavellian deceitfulness of Kenny (Kenny Hotz), routinely triumphing over the upstanding citizenship of Spenny (Spencer Rice) who, despite his affectations of decency, repeatedly descends deeper into the moral abyss under the weight of his own self-importance.

There are poop and fart jokes too, so there’s something for everyone.

Which is why the opening show of their Kenny vs Spenny vs Canada Tour, held last night at Vancouver’s Vogue Theatre, was such a crushing disappointment. For two guys who put so much effort into really pissing each other off on screen, in the flesh, they were barely trying. Spending the entire 90-minute performance sat on a sofa, oscillating between directionless anecdotes from their own lives, some admittedly choice clips from their series, and a continual stream of bad taste jokes and primary school playground puns, it was a show seemingly bereft of new ideas and coherent content.

Things actually started promisingly: the one-time friends perched together amicably, explaining the origins of their comedy career as semi-serious documentary makers, and discussing their (mostly failed) attempts to direct international Kenny vs Spenny spinoffs in different countries around the world.

“The idea of the show is that cheats prosper,” admitted Spenny in an unexpected moment of lucidity. “They don’t like that in Colombia.”

Of course, no one goes to a Kenny vs Spenny live extravaganza for cultural analysis, and as the heckles rang out from the crowd, the pair reverted to their on-screen archetypes; Kenny unleashing a torrent of bad taste jokes, and Spenny moaning as his role as Canadian TV’s eternal whipping boy blurred into harsh reality.

Criticising Kenny for offensiveness is missing the point entirely. Publicly saying the unsayable serves two purposes. It gets a laugh. But more importantly, it gets a reaction from Spenny. In their friendship-gone-sour comedy double act, Kenny’s the fire, but Spenny is the fuel. And it was the continual denting of Spenny’s pride that made the show so watchable. His ego loved being on TV so much he would willingly take the humiliation.

Alone on stage however, he was reconsidering his options.

“At least I had a show,” he barked at the crowd, while fielding a reasonable question about his solo series, Single White Spenny, during a car-crash Q&A session. “I really need a beer and I want to go home.”

By then it was too late. Spenny had polished off two cans of Guinness while sat on stage and the emotional dirty laundry had already been aired, Kenny going far below the belt revealing long distant issues between Spenny and his mother. When a Kenny (who is proudly Jewish) Holocaust joke was met by silence, the writing was on the wall for a ‘show’ that delivered all the drama of two 40somethings sitting on a sofa bickering with each other.

There’s still a sliver of hope that some coherence will develop as Kenny and Spenny move eastward, or that the Tour documentary will reveal itself to be a brilliant satire on the nature of celebrity and how little effort it takes to keep a ‘Reality TV’ audience entertained. Here’s hoping.