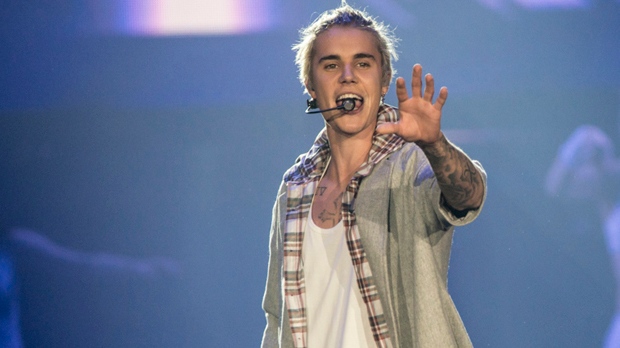 The late, great David Bowie may no longer be with us, but the art of self-reinvention continues in his absence. This was the lesson delivered by Justin Bieber Friday night at Vancouver’s Rogers Arena, only the second date on his ‘Purpose’ World Tour, featuring a set-list 75 per cent of which was drawn directly from his latest album of the same name.

The genius of Justin Bieber, it would appear, is transforming from a syrupy teen idol into an 21st century r’n’b lothario while maintaining the exact same irritation level as his previous incarnation.

That’s not to say he doesn’t put on an entertaining concert, as a sold out Rogers Arena would attest. As the Biebs emerged alone in a glass box through a maelstrom of screaming for opener “Mark My Words,” the imagery was easy to comprehend. The artist is on exhibit. You be the judge. Dancers exploded from the stage moments later, the one-two punch of “Where Are U Now” and “Get Used To It” doing their job in getting the crowd up and bouncing.

“I feel like there were moments when I wanted to give up,” he explained by way of introducing “I’ll Show You,” performed in a cage; the second visual metaphor of the evening accompanied by the first of a selection of unwarranted whines from the Crown Prince of Privilege.

“How about we slow it down a little bit?” he asked six songs into the night, settling down on a sofa with an acoustic guitar.

“Yo. My ears are cutting out,” he announced, prompting an engineer to run on stage to stick a new radio monitor under his shirt.

“Don’t you guys wish you had this guy’s job?” asked Bieber, the undeniably best of the night’s rare ad-libs. Stripped to its rawest state, there’s no denying Bieber’s talent; his fine vocals and guitar playing illuminating “Love Yourself,” “One Less Lonely Girl” (performed next to a hyperventilating young lady pulled from the crowd) and “Home To Mama.”

The fun continued as Biebs and his dancers climbed a trampoline suspended 15 metres above centre ice to perform “Company,” even if it was stretching credulity to believe he was singing while performing back flips.

So far, so entertaining. But things began to get weird during a slow jam section of “No Sense,” “Hold Tight” and “No Pressure” as Bieber pulled out a selection of cringe-inducing dance moves. Think drunk Dad. Only with a man-bun.

The lights and dance troupe were both dazzling for “As Long As You Love Me,” a track finished by a more than decent drum solo by Bieber. He’s actually a better drummer than dancer, even though he couldn’t resist mentioning and looking at the drumstick-induced blisters on his hands for the rest of the show.

On production value alone, the ‘Purpose’ Tour delivers a solid evening of entertainment. But the feeling lingers that, despite what his script tells him to say, Justin Bieber has fallen out of love with his day job. Throughout the show he seemed disconnected and cold. His dancing was competent but never popped. Smiles were infrequent. Worst of all, his few interactions with the crowd seemed forced: meaningless platitudes from an artist with a giant platform but nothing to say.

“Go to merch and buy this exact thing,” he exclaimed in a rare moment of energy, flashing his ‘Purpose’ jean shirt by way of introducing “Baby,” the best-received song of the night, suggesting that his fans miss the cuddly prepubescent of the distant past rather than the self-pitying star of the present.

“People say things about me. But they don’t know me. I choose to be different.”

The show concluded, not with words of gratitude, but with a strange combination of wailing guitar solo and a pre-recorded voiceover of spouted bullshitters’ excuses for his famed misdemeanours and errors of judgement.

The encore, appropriately enough, was “Sorry,” accompanied by a neat effect as rain poured from the stage’s temporary roof, providing an easy excuse for a soaked Bieber to take his shirt off.

“I had the best time,” he announced, a disputable punctuation point to a strangely joyless performance.

The adulation remains, but on last night’s evidence being Justin Bieber doesn’t look like fun at all.