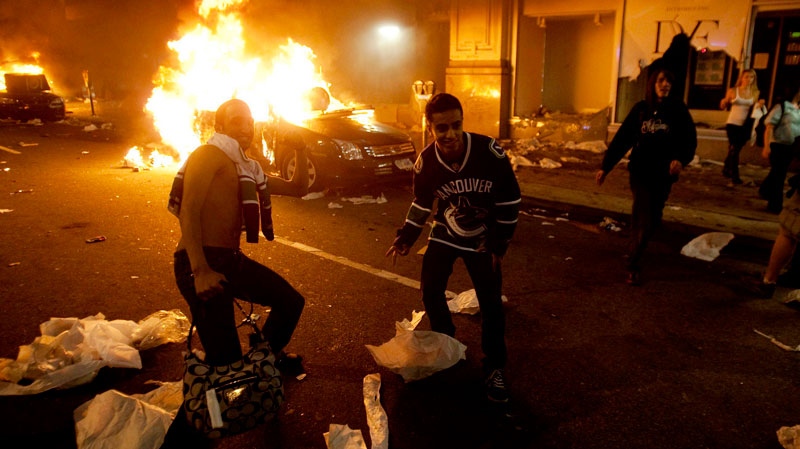 Vancouver Canucks hockey fans take part in a riot in downtown Vancouver on June 15, 2011, following the Vancouver Canucks 4-0 loss to the Boston Bruins in game 7 of the Stanley Cup hockey final. (Ryan Remiorz / THE CANADIAN PRESS)

Recommendations contained in two reports resulting from Vancouver's Stanley Cup riot raise questions about the responsibility of the National Hockey League and its teams to prevent a recurrence of similar violence and destruction at future finals.

One of the recommendations contained in the independent review into the June 15 riot says the NHL should partner with host cities and franchises "to help ensure the best, safest public celebrations possible."

The city of Vancouver's internal review recommends the Canucks be part of discussions, along with the NHL and local business groups, to create a "community-based organization to plan, raise money, and oversee any future Fan Zone activation sites."

Vancouver Mayor Gregor Robertson said leagues like the NBA and NFL take an active role in working with host cities at major events.

But business professor Richard Powers questioned why the league or Canucks have any responsibility for what happens outside the arena.

"The club and league, they provide a source of entertainment," Powers, a professor of business law and ethics at the Rotman School of Management at the University of Toronto, said Friday.

"It's sports. It's not policing, it's not crowd control. It's not their expertise."

The ultimate accountability rests with the police and the city's mayor.

"It's the police and they city's responsibility," Powers said.

Nathaniel Payne, a researcher at the Beedie School of Business at Simon Fraser University in Vancouver, argues the franchise and the league do have a role to play.

"It would seem unfair to assume that a city would be responsible for keeping order and the team itself would have to bear no risk," said Payne.

It makes sense for the league to be involved in planning public gatherings because it has gained knowledge from past championships and has an understanding of the fan base.

"You would think the sports team or the league would have a better understanding of the fan base behaviour, based on the demographic work that these guys do, more so than a city would," Payne said.

Victor de Bonis, the Canucks' chief operating officer, said the team will participate in the planning of any future events.

"We feel we should be very supportive and help the city and the province as they plan future public events for our games," he said in an interview.

"Everybody that can help influence the issues and the solutions to try and develop events of that nature should be at the table making sure they are participating."

Gary Meagher, the NHL's senior vice-president of public relations and media, said the league does work with cities hosting the Stanley Cup final.

"The league's 30 member clubs already encourage and have successful programs that ensure responsible fan behaviour in all of our game venues and at all league-sponsored events," Meagher said in an email to The Canadian Press.

"We are also happy to collaborate with civic officials -- and regularly do -- when our assistance is sought around League events. "

Meagher said the NHL would have no further comment.

During the Stanley Cup final, fans were encouraged to come to downtown Vancouver to watch games on large-screen televisions in a designated viewing area.

Over 150,000 people converged on the downtown the day the Canucks lost Game 7 of the Stanley Cup final to the Boston Bruins. After the game the massive crowds torched cards, smashed windows and looted stores for several hours.

Damage from the riot is estimated in the millions of dollars.

Payne said he understands why the NHL and its teams may privately question why they bear any accountability for incidents that occur outside their buildings.

He points out the NHL and the Canucks were thrilled when pictures of thousands of happy fans celebrating on downtown streets where flashed on national television early in the playoffs.

"I'm sure the NHL loved the exposure and had (the Canucks) won and we had tens of thousands of fans screaming happily, that would have been a beautiful moment," he said.

"It would seem a disconnected to me to allow a brand or organization to operate and take all the reward without assuming any of the risk."

De Bonis said in the future, taped messages from Canuck players may be shown on the large screens urging fans to be responsible. The gatherings could also be held at B.C. Place Stadium, which was under renovations during this year's playoffs.

De Bonis hesitated when asked if the Canucks would ever recommend scrapping public gatherings.

"You would never want to go there," he said. "If there's significant risk, and at the end of the day you're not very comfortable that the risk is as low as possible, you may have to make a hard decision like that.

"I hope it never gets to that."