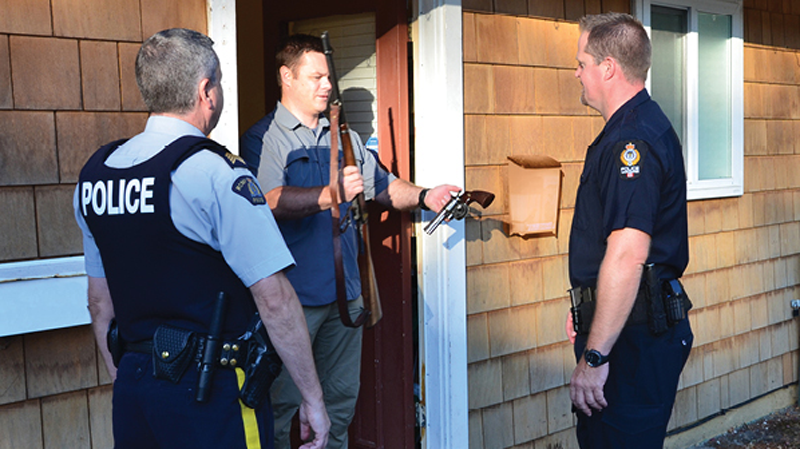 Any British Columbian who wants to turn in unwanted firearms can contact their local police department in October. (Handout)

Families across B.C. with unwanted guns and other weapons in their homes are being given a chance to give them up, no questions asked, for the month of October.

Police announced the amnesty program on Thursday, promising immunity for anyone who wants to turn in their documented or undocumented firearms.

“We recognize that some law-abiding British Columbians may find themselves in possession of firearms and other weapons that they’re not legally entitled to,” said Chief Const. Les Sylven, president of the B.C. Association of Chiefs of Police.

“We can reduce the risk of them falling into the hands of criminals or accidentally harming individuals by taking part in this program.”

There is an exception to the immunity from prosecution, however, for weapons that police determine were used in a crime. Sylven said he couldn’t recall such an incident from previous amnesties in the province.

Anyone who wants to turn in guns, weapons, ammunition or replicas is urged to call their local police department’s non-emergency line in October. Officers will then drive to the caller’s home and collect the item or items.

For security reasons, that pickup is mandatory; police stressed that under no circumstances are people to show up to the a police station with guns or weapons in tow.

The last province-wide gun amnesty program in 2013 collected 1,801 firearms, 155 other weapons and roughly 30,700 rounds of ammunition, according to the B.C. government.

Police said on top of preventing guns from ending up in the hands of criminals, amnesty programs can help prevent a number family tragedies, including suicides and accidental shootings.

“We are all too aware of the many incidents of families devastated by the accidental discharge of a firearm,” said Deputy Commissioner Craig Callens, Commanding Officer of the B.C. RCMP.

To learn more about the gun amnesty program, click here.

"We offer pick up service"; Gun amnesty program that's been tested in Surrey being expanded provide wide for month of October pic.twitter.com/UHxgHgLlmz