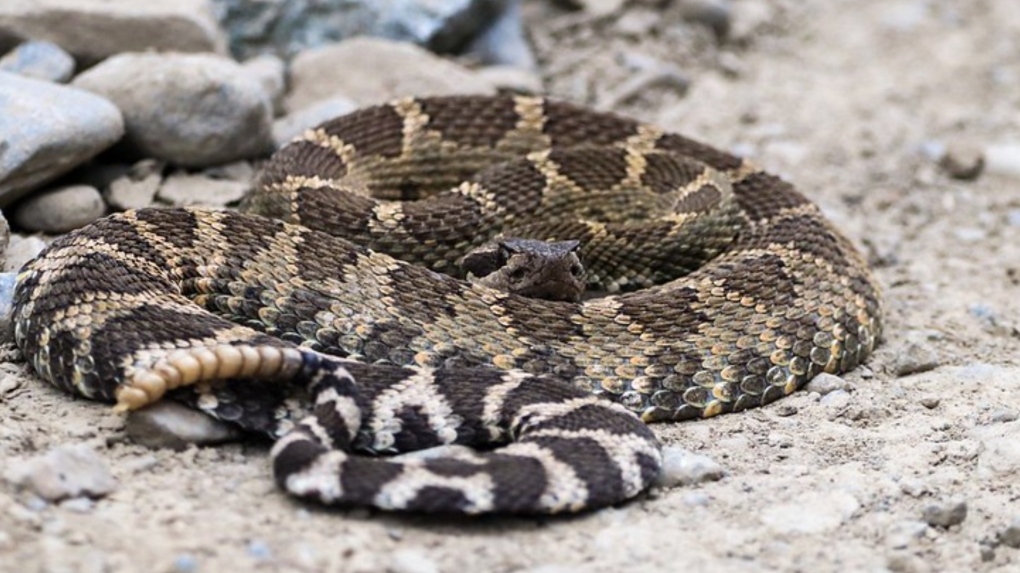 Road crews in B.C. found and rescued a Western Rattlesnake on Highway 8 on May 16, 2022. (Credit: Twitter/TranBC)

According to a social media post from the Ministry of Transportation, the western rattlesnake was found near Spences Bridge.

"Work stopped immediately, the onsite environmental monitor alerted, and the snake was relocated to a safe zone," the post reads.

Identified as a species at risk by the federal government, it is "the only truly venomous snake species native to British Columbia."

The province says a "small population" of these snakes is found in the dry valleys of the province's southern Interior, where they come out of hibernation in April.

Agricultural and urban development encroaching on their natural habitat as well as "road mortality" are two factors threatening the species, according to the federal government. They also have a "low reproductive potential," giving birth to small litters of between two and eight young every three to four years. This, according to the province, means the long-term survival of adults is crucial for the

"Human persecution," according to both the province and the feds has been and continues to be the most significant threat.

"Their exaggerated reputation for danger has resulted in needless killing of rattlesnakes, drastically reducing some local populations," according to the B.C. Environment Ministry.

"Lack of knowledge and fear of rattlesnakes have resulted in persecution and killing of snakes," says the federal species at risk registry.

Wildsafe BC says fewer than five people are bitten by a rattlesnake each year in British Columbia and the conservation service receives approximately 40 calls annually about these reptiles.

"Bites are rarely fatal if treated promptly. Most snake bites are due to people deliberately trying to handle or harm rattlesnakes. Rattlesnakes should ONLY be moved if they are a direct threat to you or your family," the website says, going on to describe the snake's behaviour and temperament.

"It is generally shy and non-aggressive. If cornered, however, rattlesnakes will rattle their tails vigorously while forming an aggressive coil with the head raised and the neck. Striking is a last resort, usually employed if cornered by a predator or occasionally when suddenly stepped on."

Highland Park Police Chief Lou Jogmen said Monday afternoon that police have identified 22-year-old Robert E. Crimo III as a person of interest and cautioned he should be considered armed and dangerous.

Canada Soccer says it has made a new compensation offer to its men's and women's national teams.