Gemma Karstens-Smith The Canadian Press Published Friday, May 31, 2019 9:54AM PDT 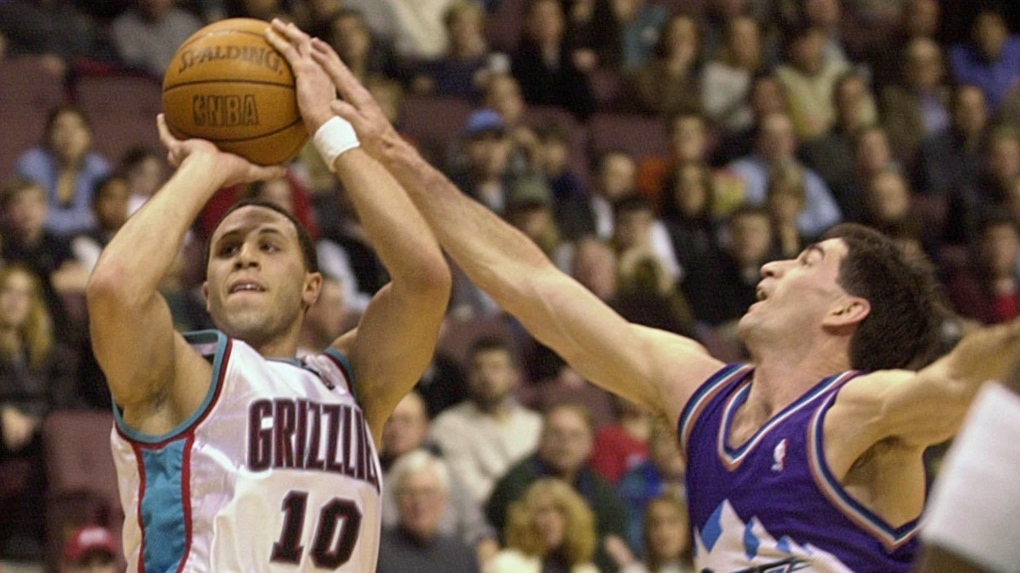 Like many Canadians, he's captivated by the stunning shots and gritty performances, but the founding owner of the NBA's now-defunct Vancouver Grizzlies also wonders what could have been.

"It's a little bittersweet in the sense that that's what I'd like our team to be doing if they were still in the league," Griffiths said. "But frankly, that's life. ... It makes me smile as well."

The businessman already owned the Vancouver Canucks when he decided to try to bring an NBA team to Canada's West Coast.

Fellow owners of NHL teams already owned basketball franchises and would take Griffiths along to games. He loved the energy and excitement emanating through the arenas.

"It's impossible not to get drawn in. It's such an up-close sport," he said. "It's the best example of the expression 'It's not how you start, it's how you finish.' The last minute of basketball is all that."

In 1995, he brought that excitement to Vancouver when the league added the Grizzlies as an expansion franchise. The Raptors, who lead the Golden State Warriors 1-0 heading into Game 2 of the NBA Finals on Sunday in Toronto, also began play in 1995.

The Grizzlies played at Vancouver's downtown arena, now known as Rogers Place, sharing the facility with the Canucks.

The team struggled on the court but was embraced by fans, drawing an average crowd of more than 17,000 in the first season.

Vancouver was down through the first three quarters, but roared back in the fourth to force overtime. Chris King's tip-in at the buzzer sealed the overtime victory.

"That was a thrilling experience to see the crowd go literally bonkers," Griffiths said.

During the Grizzlies' six seasons in Vancouver, they posted a dismal 101-359 record. But Griffiths said there were many highlights.

"We beat virtually everybody at one point," he said. "Except Michael Jordan."

After a lockout-shortened season in 1999, support for the Grizzlies waned and the financial issues that followed were compounded by a struggling Canadian dollar.

Griffiths eventually sold his interest in the team to Seattle businessman John McCaw and the Grizzlies moved to Memphis, Tenn in 2001.

Griffiths went on to work on various other projects after he exited the Grizzlies' fold. Today he's in consulting for mergers and acquisitions and the CEO of World Farms Corp., which grows cannabis in various countries around the world.

Despite the loss of the Grizzlies, basketball remains popular in Vancouver.

The Raptors often hold training camp in the city, drawing hordes of NBA-starved fans. Bars have been packed with people dressed in black and red, cheering for Toronto during the current playoff run. Sports stores still sell the old black-and-turquoise Grizzlies jerseys.

Griffiths is proud of his part in building the city's love for the sport.

"Genuinely, I'm a big fan of what we tried to do here," he said. "And hopefully we'll be able to bring it back one day."

Former commissioner David Stern has said he regrets the demise of the Grizzlies.

With Toronto's recent success and the rampant support the team has garnered from across the country, some in Vancouver have wondered whether the time is right to bring an NBA team back.

It's a question Griffiths is asked frequently.

"I don't doubt for a minute that that initial base and then the NBA's success in this subsequent success in this country is solid," he said. "I'm convinced that the NBA would and should come back (to Vancouver)."

For now, though, Griffiths will root for the Raptors. NBA commissioner Adam Silver said Thursday night the league is not currently considering expansion.

"It's not very often I cheer for Toronto," Griffiths said with a laugh. "But I think it's great for the game, fantastic for the NBA, to be honest with you."

It's special to watch the country come together behind a team, Griffiths added, comparing the Raptors' run to the 2010 Winter Olympics gold-medal men's hockey game in Vancouver when many Canadians hung on the edge of their seats before Sidney Crosby scored to win it in overtime

"One of the things we all know is that when Canadians come together to cheer for something, it's positive for our country," Griffiths said. "(The Raptors) are unifying. It's a great story and I think it just demonstrates the power of the NBA brand."

Masai Ujiri's talk with Lowry the turning point in their relationship

Jumping on the Raptors' bandwagon? Here's what to know

We the North America? Data shows majority of U.S. also cheering for Raptors