Racist but unenforceable clauses in some B.C. land covenants bar residents of 'African or Asiatic descent'

Racist but unenforceable clauses in some B.C. land covenants bar residents of 'African or Asiatic descent' 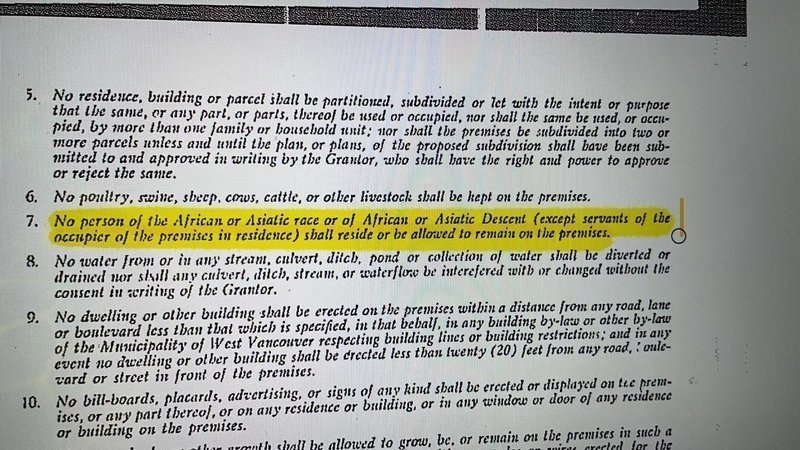 Part of a restrictive land covenant for a West Vancouver, B.C., property is seen in an image posted on Change.org. (Michele Tung)

There are growing calls to proactively scrub racist language from restrictive land covenants in British Columbia, including clauses that once barred people "of African or Asiatic descent" from living on certain properties.

Changes to provincial legislation rendered those clauses unenforceable decades ago, but the language remains on some covenant documents, as one homeowner in West Vancouver was recently horrified to discover.

Michele Tung was asked to submit the restrictive covenant for her property to the district while applying for a building permit, and learned that Black and Asian people were once prohibited from living there, "except servants of the occupier of the premises."

"I was shocked and appalled," Tung told CTV News on Monday. "It feels awful, and I don't want our children's children, or someone else's children to one day have to see this language."

The homeowner created a Change.org petition demanding that the outdated covenants be addressed once and for all, and has already collected more than 1,500 signatures.

The petition notes that West Vancouver council vowed to work with the provincial government to have the language removed back in January 2020, but there has been little discernable progress since.

"There's a way to learn from this," Tung said. "I believe in learning from the past. But to continue having this process where I need to submit a racist document for a permit application, in this day and age, is wrong."

Being forced to track the covenant down and provide it to the district was "humiliating and offensive,” she added.

Contacted for comment, a spokesperson for the District of West Vancouver stressed that land titles are ultimately the purview of the province, not municipalities, but said staff are preparing a report on potential actions that can be undertaken locally.

That report is expected to be delivered to council this spring.

"These covenants are found in many municipalities, and this is a widespread issue," Donna Powers told CTV News in an email. "West Vancouver is looking into how it can best lobby other levels of government to implement a process for removal."

Even though the covenants are no longer legally recognized, Powers said they are "deeply upsetting as a reminder of this country's racist past" and should be addressed.

Tung said the troubling responses she's received from some of her neighbours since launching her petition have only strengthened her resolve. That includes a social media post telling her that "no one cares about what race you are" and that she should "get a life."

"There's been blowback with people saying, 'What's the problem? Suck it up,'" Tung said. "There is something deeply wrong with this."

According to B.C. Land Title and Survey, discriminatory covenants restricting the ownership and use of certain properties were still being drafted as recently as the 1950s.

They were voided with changes to the Land Title Act in 1978, but remain on the records.

Under the Torrens system of land registration used in the province, the registrar "must maintain a complete and unabridged record of dealings with land since the title’s origin and hence is not authorized to alter land title documents," according to the BCLTS website.

"The registrar is only authorized to ‘strike through’ the offending covenant on title upon request from an owner without a fee, or on the registrar’s own initiative."

With more than two million active land titles across the province, the Land Title and Survey Authority "relies on the assistance of homeowners, local governments and property professionals to identify any remaining land titles that are affected."

Property owners can flag racist language and request a strikethrough either by email or letter.

"For me, this issue is very clear," she said. "It's wrong to have this language."