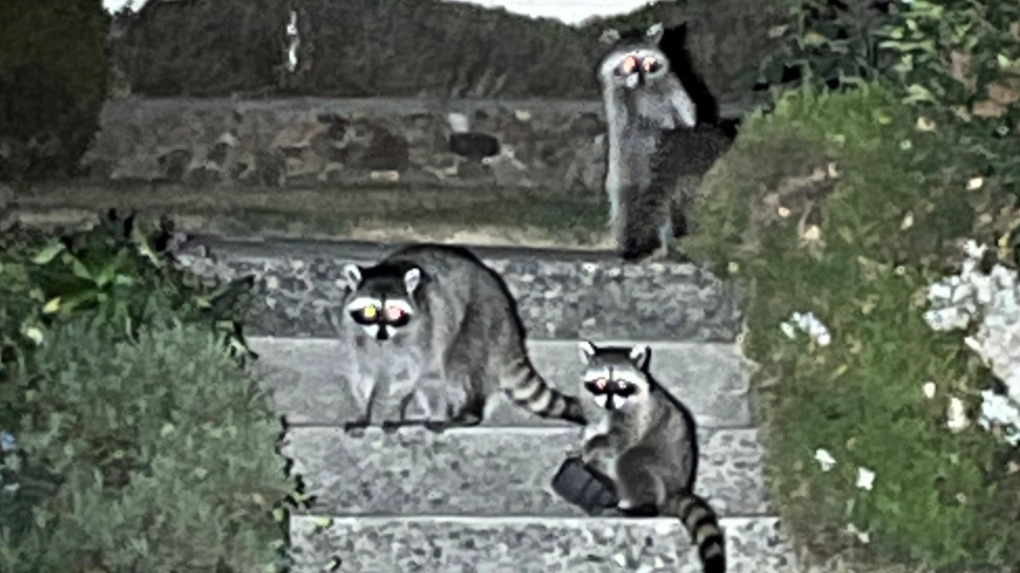 Police in New Westminster are searching for the rightful owner of a wallet after a bizarre police chase involving a trio of raccoons (Photo: New Westminster Police Department/Twitter).

Police in New Westminster are searching for the rightful owner of a wallet after a bizarre police chase involving a trio of raccoons.

In an email to CTV News, the New Westminster Police Department says the masked bandits were seen taking off with someone's wallet in the 1400 block of 8th Avenue Thursday night.

"Officers spotted the little raccoon with the wallet as it ran across the road," says Hailey Finnegan, the NWPD's strategic communications co-ordinator.

Finnegan adds that the officers promptly pulled over and chased after the bandits.

"Some officers were doubling over in laughter," she says. "Despite their best efforts, the raccoons evaded officers."

Despite a lengthy career, one officer says he's never seen anything quite like this before.

"In my 14.5 years on the job, I think I'm close to having seen everything," says Sgt. Dave Jansen.

New Westminster police are asking anyone who believes this may be their wallet to contact them at 604-525-5411.

What kind of damages caused by Fiona will be covered by insurance?

Many residents of Atlantic Canada may not be able to access coverage for all the damages caused by Fiona due to a lack of insurance covering storm-related floods.

Russia is poised to formally annex areas of Ukraine where it has military control after referendums there reportedly endorsed Moscow's rule.

opinion | Naheed Nenshi: A moment that changed the fabric of this country forever

Fifty years ago, there was a moment that changed the fabric of this country forever, Naheed Nenshi writes in an exclusive column for CTVNews.ca. For arguably the first time, Canada extended its hand to refugees who looked different, who worshipped differently than most Canadians, but who needed help, the former Calgary mayor says.

Newfoundland and Labrador is setting aside $30 million for residents affected by post-tropical storm Fiona.