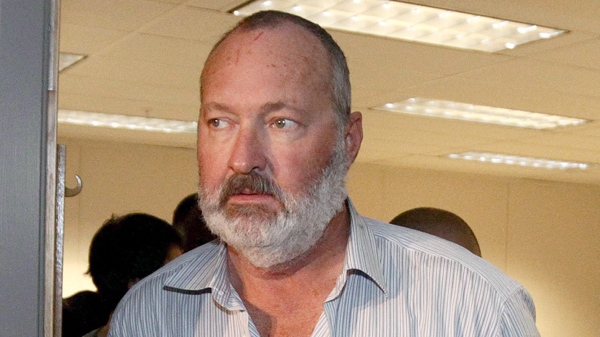 Actor Former Oscar nominee Randy Quaid is escorted from an Immigration and Refugee Board hearing in Vancouver, B.C., on Friday Oct. 22, 2010. (Darryl Dyck / THE CANADIAN PRESS)

TORONTO - Oscar-nominated actor Randy Quaid and his wife Evi may face something of a Catch 22 in their now infamous claim for asylum in Canada.

At a bizarre immigration hearing in Vancouver last week, the couple declared they were seeking refugee status north of the border for fear of being murdered in the United States by "Hollywood star whackers."

At the same time, the Quaids are due to appear in a Santa Barbara court next week on felony vandalism charges and their U.S. lawyer has said he expects them to show.

The situation places the Quaids in a peculiar conundrum, one likely to come to a head as the couple appears at another immigration hearing in Vancouver on Thursday.

Refugee law expert Audrey Macklin says any refugee claim by the Quaids would essentially fail if the couple were to make their California court appearance next week.

"If they make a refugee claim in Canada and then return to the country where they say they have a well-founded fear of persecution and then try to come back to Canada to resume their refugee claim -- I don't think that it's going to go very far," she said.

"If they're the subject of a warrant in the United States, there might be a basis for saying they might be inadmissable to Canada," she said.

After a Santa Barbara court hearing on Tuesday, senior Deputy District Attorney Lee Carter made it clear that the U.S. warrants for the Quaids -- which prompted their arrest in Vancouver to begin with -- remain outstanding.

The couple's U.S. lawyer Robert Sanger told the court he had been in contact with the Quaids and expected them to be present for the hearing which is set for Nov. 2.

Quaid and his wife face felony vandalism charges after more than $5,000 in damage was found in a guest house of a Montecito, California home they had previously owned.

Through it all, the Hollywood couple, who face no charges in Canada, have been kept behind bars in B.C.

Neither their lawyers nor authorities would provide any explanation for why they were held despite being ordered released on $9,750 bail last week.

Macklin said that struck her as strange, but added that refugee claimants can be detained if officials suspect they won't appear for their hearings.

The Quaids have frequently missed court appearances in the past for a now-resolved U.S. case involving charges they defrauded an innkeeper.

Meanwhile, the couple's Canadian lawyer has been tight lipped this week, refusing to return requests for comment on what the Quaids will do next.

Last week though, Tsuji read a single-sentence statement to media from the Quaids.

"We are requesting asylum from Hollywood star whackers," he read, and declined further comment on the mental state of his clients.

Evi Quaid, 47, had begged an immigration adjudicator to allow the couple to stay in Canada saying she feared for her 60-year-old husband's life after some of their friends, like actors David Carradine and Heath Ledger, had been "murdered" under mysterious circumstances.

Ledger died in January 2008 from an accidental overdose. Carradine was found dead, hanging from a rope, in a suite at a luxury Bangkok hotel. Neither actor's death was ruled suspicious.

Meanwhile, one positive tidbit of news for the Quaids is that their dog, Doji, is doing well.

Wendy Stewart, a spokeswoman with the City of Vancouver says the two-year-old Blue Heeler was delivered to the city's animal shelter after its owners were apprehended.

"The dog is in very good shape and very good health," said Stewart, adding that shelter staff had been contacted by a representative of the Quaids to make arrangements for the animal.

"There's an indication that the dog will be picked up in the next day or so," she said.

Randy Quaid is best-known for supporting roles in films such as "Independence Day" and "National Lampoon's Vacation."

He has said the couple came to Canada because he was being given an award by a film critics group. He added that they were considering moving to Vancouver, where he planned to jump-start his career.