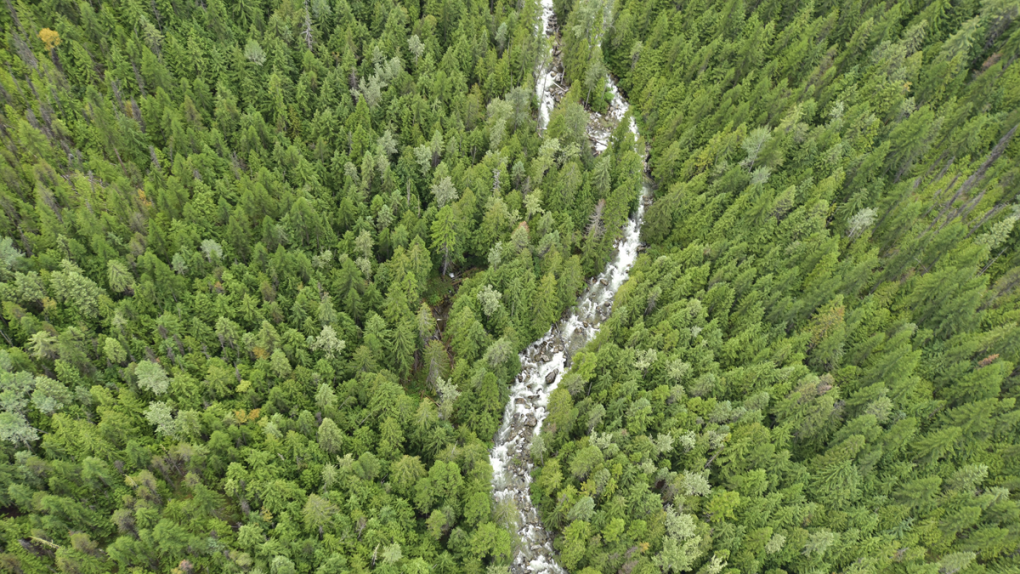 An aerial view of Next Creek in British Columbia in an undated handout photo. (THE CANADIAN PRESS/HO - The Nature Conservancy of Canada, Steve Ogle)

NELSON, B.C. - A southeastern British Columbia watershed including a rare inland temperate rainforest has been purchased by the Nature Conservancy of Canada, protecting it from development.

The national land trust says the purchase and protection of the 79-square-kilometre Next Creek watershed was one of its highest conservation priorities in B.C.

The watershed, along the west side of Kootenay Lake between Nelson and Creston, is located in the centre of the more than 600-square-kilometre Darkwoods Conservation Area.

Because the Next Creek watershed was privately owned, the nature conservancy says it, and the surrounding conservation area, faced a threat of intensified or unsustainable industrial or recreational activity.

The conservancy says acquisition of Next Creek effectively completes the Darkwoods Conservation Area and a network of protected lands covering most of the mountainous region bounded by the lake and highways 3 and 6 between Nelson, Salmo and Creston.

Close to $20 million was needed to purchase the land and provide for the long-term management of Darkwoods, with funds coming from private donors, governments and several businesses and foundations.

Darkwoods offers essential habitat for almost 40 confirmed species at risk, including grizzly bear, wolverine, peregrine falcon and mountain caribou, as well as an inland temperate rainforest which is rare because it receives most of its moisture from snow.

"Conserving the Next Creek watershed and expanding the Darkwoods Conservation Area presented an incredible opportunity to fulfil a conservation vision that started over a decade ago," Newhouse says in a news release.

George Heyman, B.C.'s minister of environment, says the province is committed to preserving B.C.'s natural legacy as Canada's most biologically diverse province with the highest percentage of protected areas.

“It is a large part of our identity and we want our kids and grandkids to experience this beautiful, diverse province as we have the fortune to,” Heyman says.