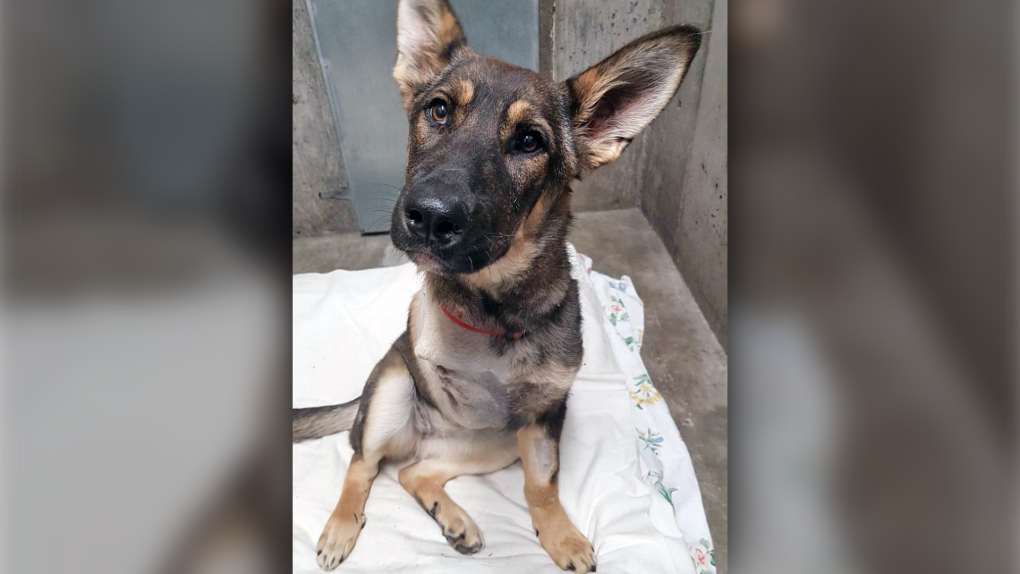 Seven-month-old Chilli the German shepherd is recovering from an emergency amputation surgery after falling off the back of a pickup truck. (SPCA)

Warning: This story contains graphic details that could be upsetting to some readers.

VANCOUVER – An accident that left a young puppy with "horrific injuries" has prompted a warning from the BC SPCA about the dangers of driving unsecured pets around in pickup trucks.

The seven-month-old German shepherd, named Chilli, had to undergo emergency surgery to have one of her front legs removed after falling out of the back of a pickup earlier this month in Williams Lake.

When the dog was rushed to a veterinarian, her leg was torn at the shoulder and some of the muscles in her chest were disconnected. Some of the skin was also ripped from her forearm, and she had "numerous severed arteries," according to the SPCA.

"Chilli had such deep wounds all along her leg that the limb was beyond repair and she required an emergency amputation to save her life," Liz Dighton, branch manager of the Williams Lake SPCA, said in a news release.

The animal welfare organization said the terrible story should serve as a reminder that it's both unsafe and illegal to transport unsecured pets in the back of a pickup. Doing so violates both the B.C. Motor Vehicle Act and the Prevention of Cruelty to Animals Act.

Chilli's owner has already surrendered care of the dog, according to the SPCA.

If a pet has to be transported in the back of a pickup, the SPCA said the safest method is to keep the animal inside a secured crate in the centre of the cargo bed.

Chilli is still recovering from her amputation surgery, and is expected to need follow-up examinations, physiotherapy and daily care for weeks before she's ready to be adopted out again. The SPCA estimated the cost of all her care will reach about $4,200.

Dighton asked anyone interested in helping out to make a donation to pay for the puppy's recovery.

"This young lady is super-friendly and sweet," she said. "She enjoys cuddles and is so careful to be gentle when around people."