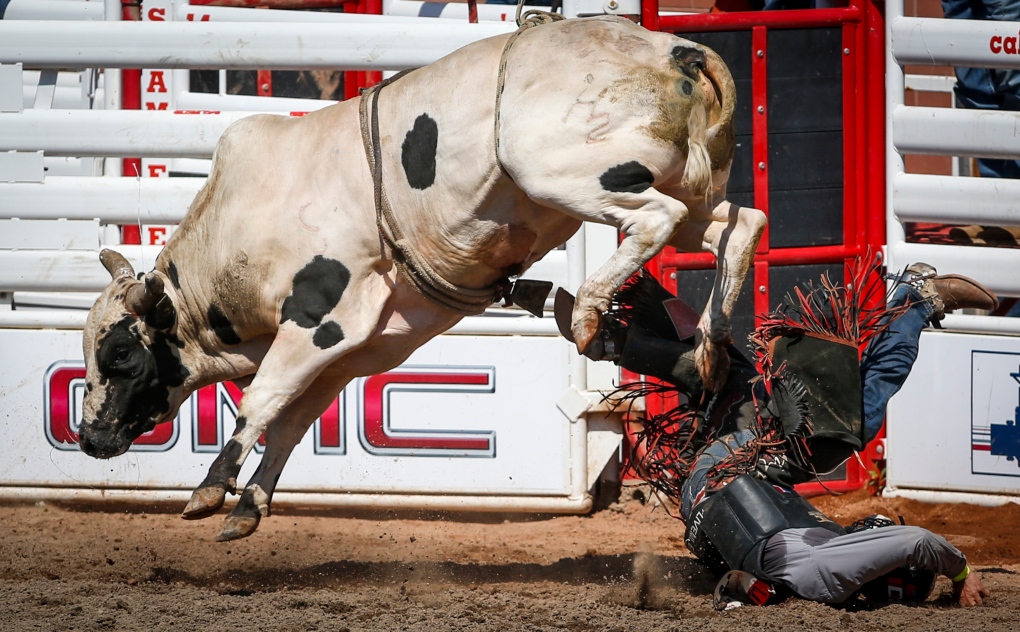 A rodeo performance is seen in a file image.

The B.C. SPCA is speaking out against a new rodeo event proposed in the Lower Mainland, arguing it would mark a "major step back for animal welfare" if allowed to proceed as planned.

The event is being organized by the Valley West Stampede Society, and would be held in Langley Township over the Labour Day long weekend, according to the Canadian Professional Rodeo Association website.

"To encourage the horse or bull to buck, a flank strap is wrapped around the hindquarters of the animal, applying pressure to their sensitive underbelly," SPCA farm animal welfare manager Melissa Speirs said in a statement.

The SPCA argued cattle ranching and horse riding skills can be showcased in ways that don't cause fear, anxiety or pain to animals.

"We know that everyone is eager to reconnect with their communities after the past two years, but we encourage people to only take part in community events that do not put animals at risk," Speirs said.

"There are many wonderful family events, including those with an agricultural focus, taking place in our province this summer. The rodeo doesn’t need to be one of them."

The Vancouver Humane Society has also slammed the proposed event, pointing to an April 2022 poll that found 64 per cent of British Columbians are opposed to using animals in rodeos.

Speaking to CTV News, the CPRA disputed that animals are harmed at bucking events, and pointed to a study from the University of Calgary that sought to understand horses' experiences during those performances.

That study, published last year, found horses less likely to demonstrate "balking or vigorous behaviour" while waiting to be let into an arena if they had participated in previous rodeos.

"The results of the role of experience and potential performance-related anticipatory behaviours is likely indicative of horses’ habituation to rodeo versus learned helplessness," according to the study's abstract.

The CPRA declined to comment directly, but pointed to a statement on animal welfare posted on the association's website.

"The membership of the Canadian Professional Rodeo Association is comprised of some 1,400 people who own large numbers of livestock," it reads.

"Most have more than a monetary tie to animals. Nearly all have lived and worked around animals for most of their lives, and possess a high degree of respect and appreciation for livestock."

The planned event would be taking place in the absence of the Cloverdale Rodeo in Surrey, which was cancelled because of the COVID-19 pandemic in 2020 and 2021, and again in 2022 to make necessary repairs at the venue.

Organizers have already announced that event will return in May 2023.