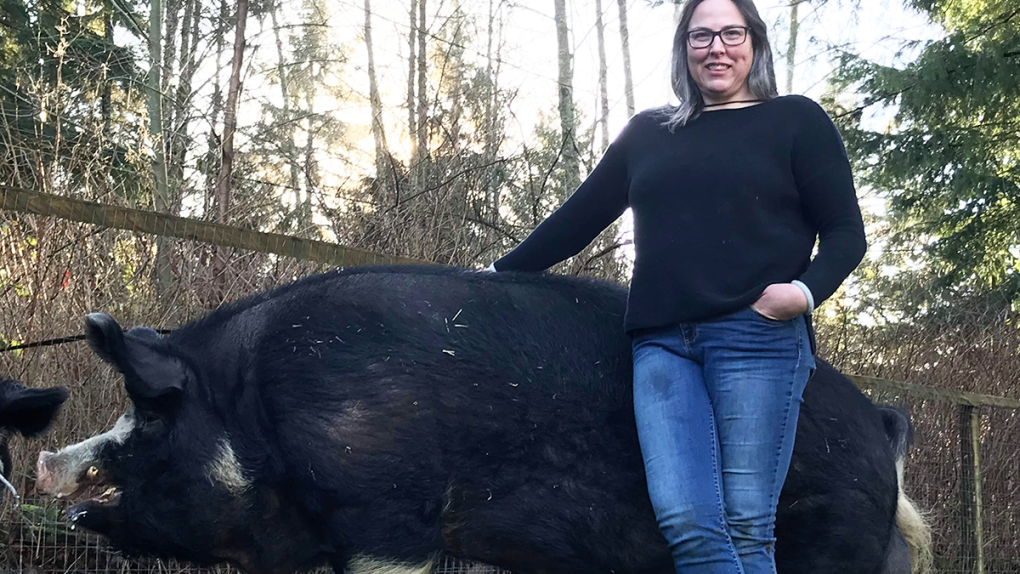 Raquel Kolof, a farmer on the Sunshine Coast, is shown in a provided image.

VANCOUVER -- Possible changes to one of B.C.'s farmland laws could result in secondary dwellings being permitted more easily.

In a policy intentions paper released by the province, the Ministry of Agriculture said it's considering "residential flexibility in the Agricultural Land Reserve." Specifically, the changes could allow farmland owners to build a small, secondary residence on their property, without first having to get permission from the Agricultural Land Commission.

In 2018, the province introduced Bill 52, which sought to lessen development on farmland. Home sizes were limited, soil removal was restricted and penalties for dumping were increased.

But Raquel Kolof, a farmer on the Sunshine Coast, said some of the measures introduced in the bill were detrimental to those farming in rural parts of the province.

"Bill 52, in my opinion, was a response to Lower Mainland issues that could have been easily resolved with Lower Mainland bylaws," said Kolof, who raises Berkshire pigs and Icelandic sheep at Hough Heritage Farm in Gibsons.

"We appreciate and really approve of the need to remove the possibility of any dumping of industrial waste, we agree that soil should not be removed from farmland – it's a precious resource – but Bill 52 went too far in punishing the rest of B.C. for Lower Mainland problems that could have been solved on a local, municipal level."

Construction of large homes on farmland is one of those Lower Mainland-specific issues, Kolof said.

"We don't have an issue of mega-mansions here on the Sunshine Coast. Most of B.C. does not have an issue with that," she said. "Fine if they want to limit the size of housing on ALR land but removing the second dwelling was harsh, it was punitive and it put a lot of farmers in very precarious positions and stopped a lot of new farming opportunities."

In its intentions paper, which was released Monday, the provincial agriculture ministry said residential flexibility can help farming families stay together, create options for joint-ownership of property, support new farmers or make room for an additional source of rental revenue.

A significant change being proposed is that secondary residences would not need to be for immediate family members.

"Families are different all across B.C.," Kolof said. "Some of us don't have families that can live on the farm and instead would need rental opportunities in order to provide that support. Some of us in the areas we live in there is no farm help around so rental opportunities would provide financial support."

One Lower Mainland city that has dealt with issues of mega-mansions is Richmond. Previously, the possibility of allowing secondary residences on ALR properties was a concerning prospect for some, particularly when the city was establishing its own bylaws to limit farmland development.

"We really thought that – rather than what they're now calling a small, secondary residence – it was going to be two full-sized houses and rather than one huge mega-mansion, it was going to sort of become a housing development," said John Roston, who belongs to Richmond Farm Watch, a farmland advocacy group.

"The way they've worded the (intentions paper), it would limit the amount of space the secondary residence could take to prevent it from being some huge thing."

Under the proposed changes, not only could the size of a second residence be limited, but permission would still be needed from a local government to build the structure.

However, Roston said it was getting approval from the ALC that's been a hurdle for some farmers. He said he brought this issue up during consultations with the province and suggested the ALC be taken out of the process or have someone from the ALC be appointed to help farmers ensure their applications were successful.

"But this is much better because now they don't have to go to the ALC and make an application altogether," he said.

The province will continue to refine the proposal until April 17 and afterwards potential recommendations will be made to the government.

For now, Kolof said she feels farmers are being heard by the ministry.

"Farming is so difficult … most of these farmers who are providing really nutrient-dense food for the community are doing so with very little profit," she said.

"We are very thankful that there was proper engagement with stakeholders, with farmers and that we were listened to."