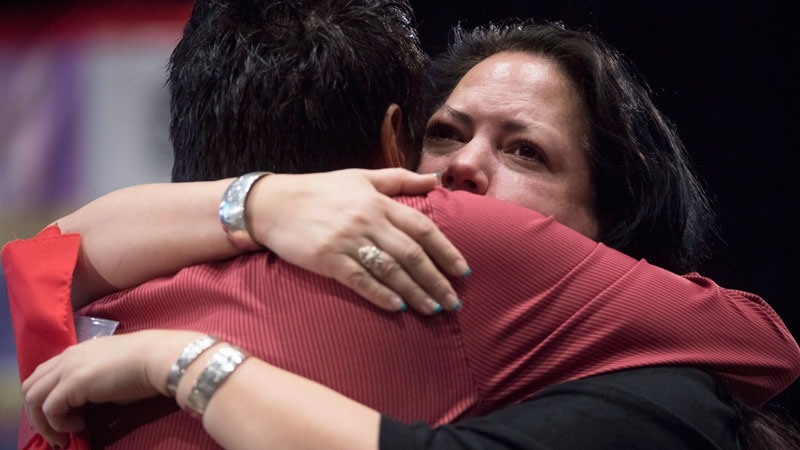 Catherine Mills receives a hug following her testimony during the National Inquiry of Missing and Murdered Indigenous Women and Girls in Richmond, B.C., Wednesday, April, 4, 2018. (THE CANADIAN PRESS/Jonathan Hayward)

VICTORIA - British Columbia Premier John Horgan says survivors and their families showed courage and leadership in sharing experiences that form the final report of the National Inquiry into Missing and Murdered Indigenous Women and Girls.

A statement issued by the premier's office says the final report highlights the "gendered impacts of colonial violence" that have been so severe the inquiry defined them as a "Canadian genocide."

Horgan says the B.C. government is committed to learning from the stories, taking action and enacting change, adding that the report and its recommendations will be reviewed in detail.

They will also be considered in context with the New Democrat government's work to implement the United Nations Declaration on the Rights of Indigenous Peoples and the findings of the Truth and Reconciliation Commission.

According to B.C.'s submission to the inquiry in December, more than 100 Indigenous women and girls had been murdered or gone missing in the province.

Horgan says identifying issues linked to the much higher violence rate against Indigenous women is key, and is vital to the government's work toward true reconciliation.

"We are committed to developing a path forward to end violence against Indigenous women and girls that will be directly informed by survivors, family members and communities," Horgan says in the statement.

"Community-based engagement to collaborate on taking concrete steps together will soon begin and will continue through the summer and early fall."

In its submission to the inquiry, the provincial government also says 580 Indigenous children died between 1867 and 1984 in the 22 residential schools in B.C., and thousands more youngsters were taken from their homes and raised in non-Indigenous households during the '60s Scoop.