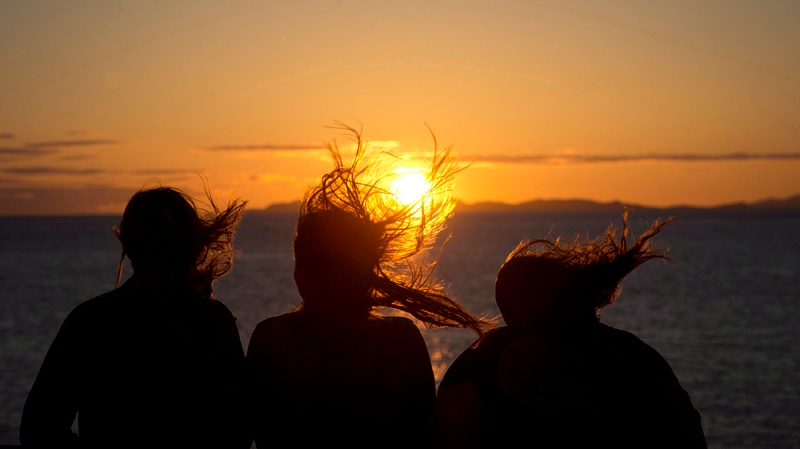 Three girls are silhouetted as their hair blows in the wind while they watch the sunset over the Strait of Georgia from a ferry traveling from Horseshoe Bay, B.C., to Nanaimo, B.C., on Sunday, June 9, 2013. THE CANADIAN PRESS/Jonathan Hayward

VANCOUVER -- Environment Canada has issued a special weather statement for Metro Vancouver, Howe Sound and parts of Vancouver Island and the Sunshine Coast, warning of "potentially damaging winds" on the way.

A strong cold front is expected to make its way through the South Coast on Sunday night and Monday morning, the weather agency said.

Winds from the southeast will reach 50 to 80 kilometres per hour Sunday afternoon before changing "sharply" to the northwest Sunday night or early Monday morning, according to Environment Canada.

The timing and strength of the winds will vary around the region, with most areas forecasted to see wind speeds decreasing by Monday afternoon.

A wind warning is also in effect this weekend for the B.C.'s North Coast and Haida Gwaii. Winds there are expected to hit 90 kilometres per hour, causing the potential for loose objects to be tossed about, according to Environment Canada.

The agency's statement for the South Coast regions does not anticipate similar effects.