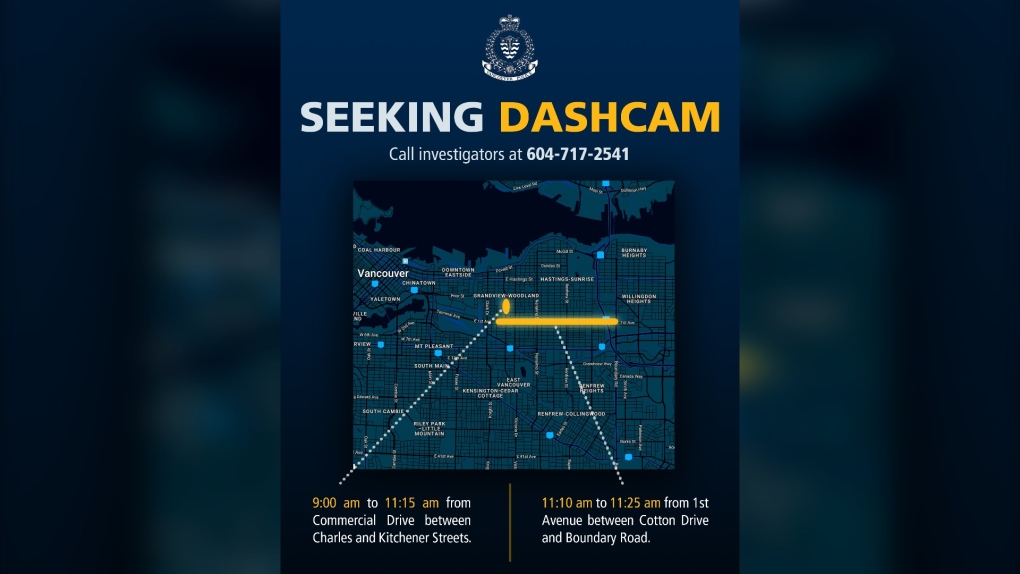 Police have provided a map of the believed movements of two suspects in Sunday's robbery at Cafe Du Soleil. (Handout)

Authorities are asking the public for dash cam video that could help them solve a terrifying armed robbery at a busy East Vancouver café over the weekend.

Two men with guns burst into Café Du Soleil during the Sunday brunch service and ordered everyone onto the floor in what police described as a "takeover-style robbery."

Investigators believe the suspects fled in a vehicle, heading south down Commercial Drive before turning east onto 1st Avenue – and police are hopeful other drivers will have video of the men either arriving at the scene or leaving.

"We believe there are people who may unknowingly have dash-cam video of the suspects," Sgt. Steve Addison said in a news release. "That video may contain important evidence that could help us identify the suspects and lead to an arrest."

Authorities are specifically looking for dash cam video from Commercial between Charles and Kitchener streets, and from 1st between Cotton Drive and Boundary Road captured between 9 a.m. and 11:25 a.m.

Police previously said the men were wearing hats, hoodies and gloves during the robbery.

The general manager of Café Du Soleil told CTV News he was working in the kitchen when the suspects entered. They pressed a gun against an employee's, head, leaving a bruise behind the man's ear – but no one else was hurt.

The robbers made away with victims' cellphones and other valuables. Police said the cellphones might have been taken to prevent people from calling 911, then dumped shortly after the robbery.

Authorities are asking anyone with information on the incident to call the Vancouver Police Department's Major Crime Section at 604-717-2541.