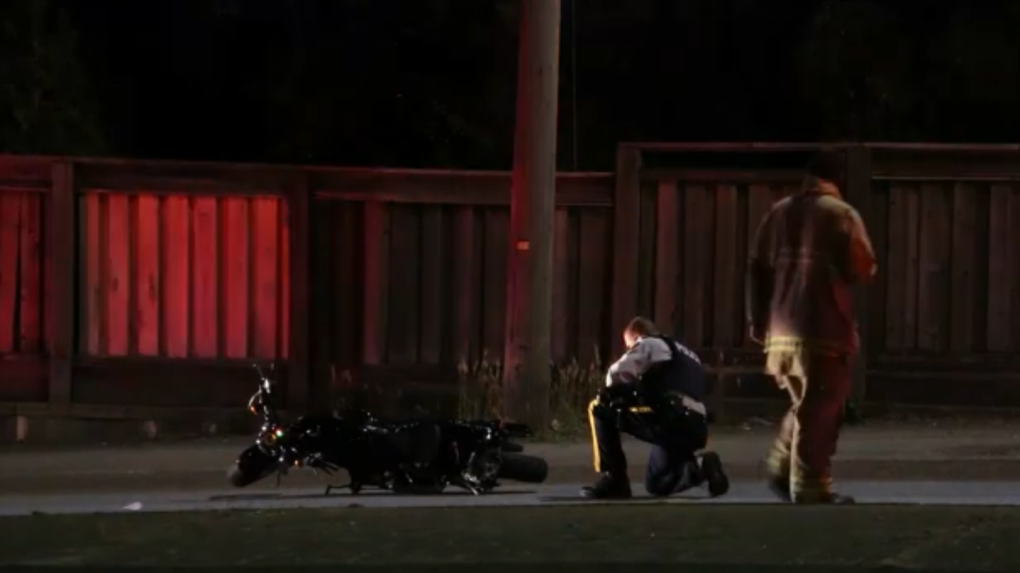 Police in Burnaby are asking the public for help as they investigate a fatal hit-and-run collision that happened in the city Saturday night.

VANCOUVER -- Police in Burnaby are asking the public for help as they investigate a fatal hit-and-run collision that happened in the city Saturday night.

Burnaby RCMP said in a news release that officers were called to the crash scene at the intersection of Canada Way and Imperial Street at 9:45 p.m.

Video from the scene shows a motorcycle on its side in the street and discarded articles of clothing and a helmet on the sidewalk.

Police, paramedics and firefighters all responded to the scene, and crews could be seen tending to an injured person before loading them onto a stretcher and taking them away in an ambulance.

According to Burnaby RCMP, the motorcyclist involved in the crash was taken to hospital, where he was pronounced dead.

"The initial investigation suggests that the suspect vehicle rear-ended the motorcycle before fleeing the area," police said in their release.

They're now asking anyone who witnessed the collision or has dash cam video from the area where the crash occurred that was recorded between 9:30 p.m. and 10 p.m. Saturday to get in touch with them.

“This is a very tragic incident that has not only taken a life, but will affect countless individuals,” said Cpl. Mike Kalanj, spokesperson for the Burnaby RCMP, in the release.

“If you can assist us in our investigation, please come forward and contact the Burnaby RCMP.”