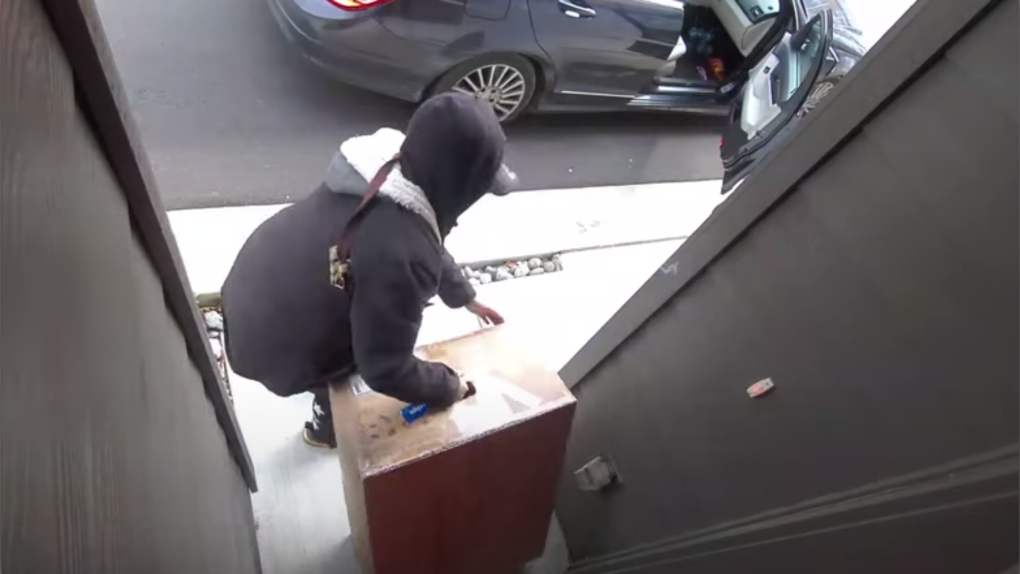 Video released by Burnaby RCMP shows a female suspect taking a package from the doorstep of a home.

Mounties in Burnaby are reminding the public to be proactive in protecting packages they plan to get delivered to their homes over the holiday season.

Following the recovery of a recently stolen stroller, RCMP said in a news release Thursday that the holiday season historically brings an increase in thieves targeting unattended deliveries.

Officials said that on Nov. 24 an Amazon package containing a stroller worth more than $1,500 was stolen from the front doorstep of a home in Surrey.

The theft was caught on security camera and the video showed a vehicle with its trunk already open pulling up to the doorstep where the large box was sitting.

Within moments, a woman from the vehicle can be seen grabbing the package and jamming it into the car. The suspect’s face and car’s license plate were not clearly captured in the video.

The next day, police said, the victim of the theft noticed what she believed to be the same stroller for sale on an online marketplace.

The woman contacted police, who determined the listing was based in Burnaby.

On Nov. 26, officers conducted a search warrant at the suspect’s home and recovered the stroller, along with a stolen Mercedes Benz that had been used in the theft.

Officials said the suspect, who was known to police, was arrested for possession of stolen property, dangerous driving, breach of conditions and on an unrelated warrant.

Police are still looking to identify the woman in the video, adding that she has tattoos on both her hands.

“Our Prolific Offender Suppression Team worked quickly and was thankfully successful in being able to reunite the victim with her stolen stroller,” said Cpl. Mike Kalanj with Burnaby RCMP in the news release. “In this case, even a security camera system wasn’t enough to deter thieves. We are urging everyone to take precautions with deliveries over the holidays.”

In order to help prevent future thefts, Burnaby RCMP’s Crime Prevention Unit is providing tips on how people can protect their deliveries from what are commonly referred to as “porch pirates”:

“Even small steps can make a big difference in protecting packages from holiday Grinches that want to put your hard-earned holiday purchases under their own tree,” said Kalanj.

Anyone who is a victim of package theft in the Burnaby area is asked to report the incident to police at 604-646-9999.

As the trucker convoy continues its journey across the country towards Parliament Hill, Ottawa police say they are making plans in the event that the demonstration turns violent, or becomes a 'multi-day event.'

U.S. offers no concessions in response to Russia on Ukraine

Secretary of State Antony Blinken said the U.S. has made no concessions to the main Russian demands over Ukraine and NATO in a written response delivered Wednesday to Moscow.