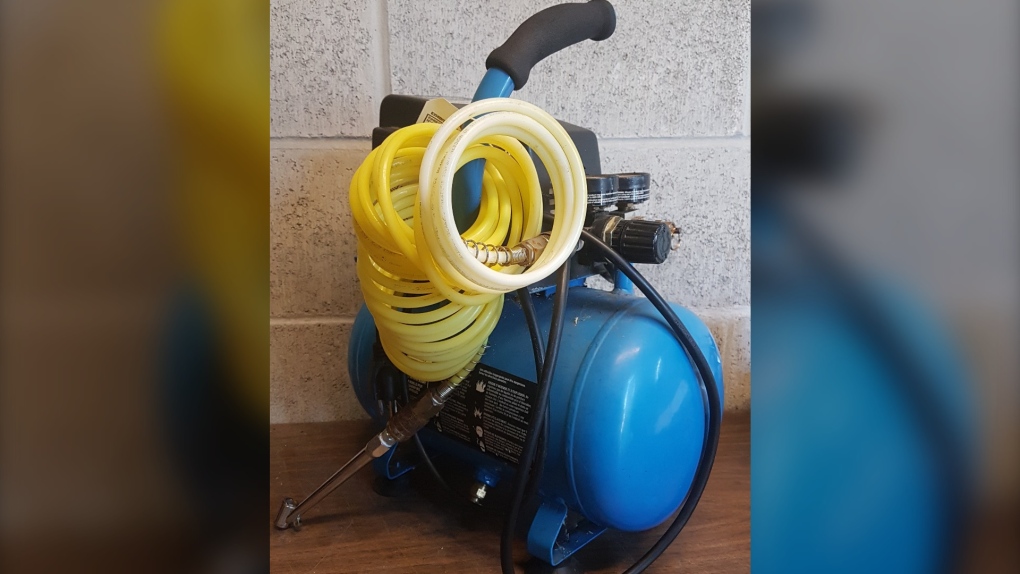 The apparently stolen piece of equipment would be used for painting or applying sealants, police say. (Nanaimo RCMP)

Are you or your workplace missing a compressor? Mounties in Nanaimo may have recovered it.

On Wednesday, Nanaimo RCMP told CTV News Vancouver Island that the item in question is a type that would be used for painting or applying sealant. Officers recovered it on July 15, after a woman spotted a man pulling it out of the back of a pickup truck around 2 p.m.

The man attempted to hide the item under his shirt and "began to nonchalantly walk away with it," police said in a release.

The woman decided this was "more than suspicious," police said, and followed him determine his intentions.

Police said the suspect -- who they called "Compressor Man" -- hid the device behind a tree on a property in the 100 block Victoria Road, near Selby Street, and walked away.

The woman flagged down a City of Nanaimo bylaw officer to explain what happened. That officer took possession of the compressor and brought it to Nanaimo RCMP.

Officers contacted the owner of the truck from which the compressor was taken, but he said he didn't own it. They also checked the device's serial number and learned that it had not been reported stolen.

Compressor Man is described as white, with a slim build and crooked front teeth. He is roughly 5'10" and was wearing a blue jacket at the time of the incident.

Police told CTV News they are also skeptical of the truck owner's explanation for why he had the compressor in his possession, though they did not elaborate on what that explanation was.

Anyone who has had a compressor stolen from their home or work site is asked to call Nanaimo RCMP at 250-754-2345. Tips can also be provided anonymously via Crime Stoppers at nanaimocrimestoppers.com or by calling 800-222-8477.

Police said they keep all unclaimed items for 90 days, after which point the person who turned them in can claim them.