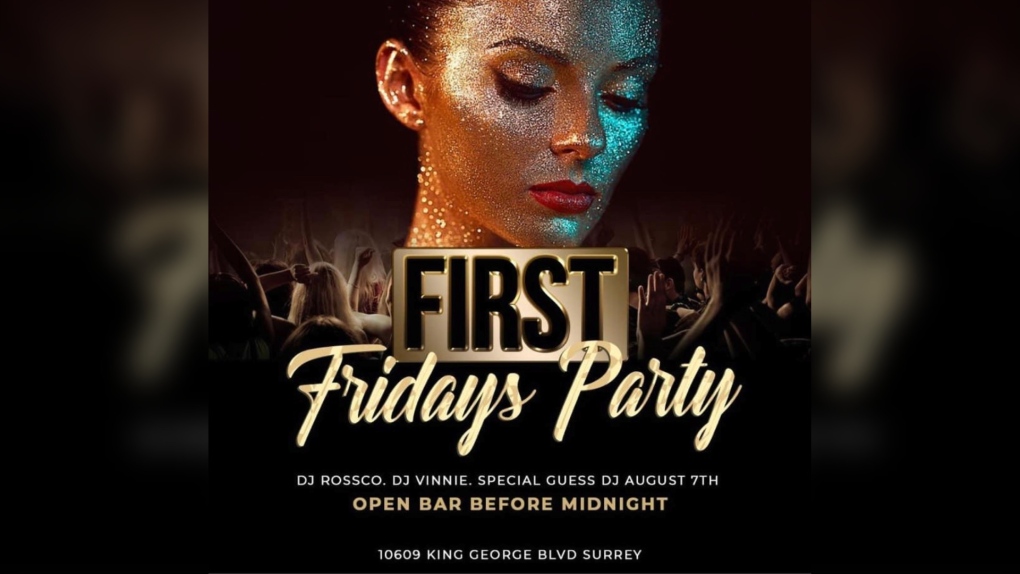 A poster for a now-cancelled club in Surrey, B.C. advertises three DJs and free drinks until midnight. Police have urged the public not to attend illegal after-hours clubs and parties.

VANCOUVER -- Police are urging people to avoid underground parties during the COVID-19 pandemic after cracking down on a number of illegal events in Surrey.

Authorities said they received information about after-hours clubs and parties in the city's Whalley neighbourhood, and that officers identified a 40-year-old man as the alleged host.

A poster for one event that was scheduled for Friday night at 10609 King George Blvd. promised three different DJs and an open bar until midnight.

"This event has been cancelled," Surrey RCMP said.

Authorities said some of the parties were held in a leased commercial space, while others may have been held in "commercial properties that (the suspect) accessed by breaking and entering."

"We want to strongly caution the public, particularly young people, to avoid these types of illegal parties, especially during a pandemic," Cpl. Bob Keay said in a news release.

Keay, who works on the Surrey RCMP COVID-19 Compliance and Enforcement Team, said illegal events are "often not compliant with local bylaws, fire codes, and public health orders that have been put in place for your safety."

Police believe the same 40-year-old man was also behind the Surrey hookah lounge where patrons were potentially exposed to COVID-19 in the early morning hours of Aug. 1.

The suspect was arrested and released on a number of conditions. Authorities said they have not recommended charges to Crown yet because their investigation is ongoing.

In Vancouver, the head of the police union revealed Friday that three officers had tested positive for COVID-19 after responding to a party of more than 100 people.