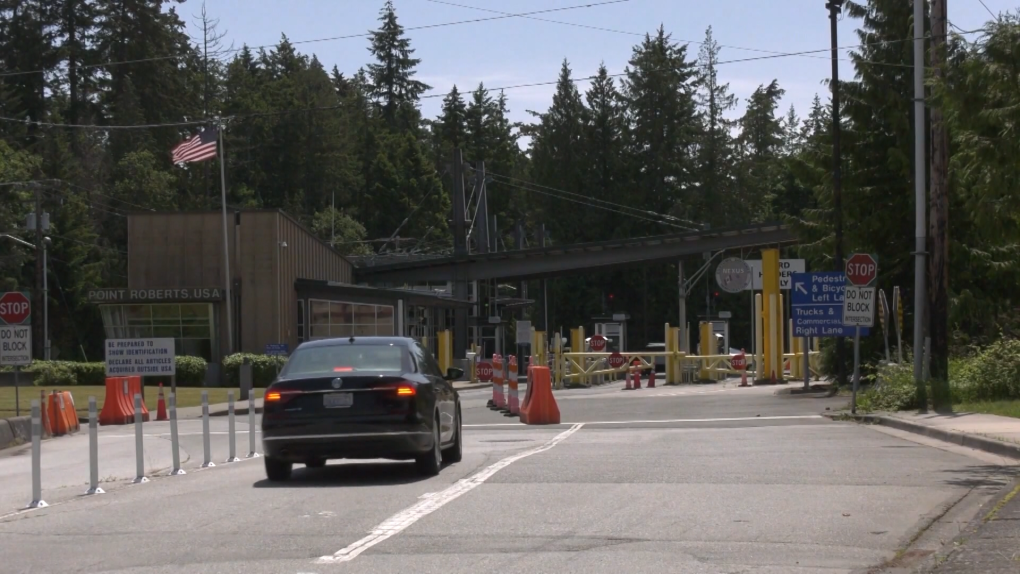 DELTA, B.C. -- Steve Power is standing on a beach across from his wife and two granddaughters, but they're ever so careful not to break the law by touching each other or stepping over an invisible line in the sand that separates the United States from Canada.

The boundary between the two countries is indicated on a plaque affixed to a giant concrete block near them between Centennial Beach in Delta, B.C., and Maple Beach in Point Roberts, Wash. A camera mounted close by is monitored by border officials stationed a few blocks away.

Power and his wife Patsy Reis-Power live in Coquitlam, B.C., about an hour's drive from Point Roberts, and are among Canadians who own property there but can't cross the border due to COVID-19 restrictions barring non-essential travel, except by air.

Power chartered a four-seater plane for about $1,000 at the Boundary Bay airport in Delta, flew to Point Atkinson, Wash., where he cleared customs, and landed in Point Roberts so he could do some maintenance work on two properties.

“I just came by myself just because I didn't want to share the small cockpit with people I didn't know. And the pilot was really cautious about everything and had a full mask on,” Power said.

On this day, Power drove an old vehicle he keeps in Point Roberts to Roosevelt Way by the beach before meeting his wife and seven- and 10-year-old granddaughters who call him “Pop Pop.”

A second meeting place for residents of Point Roberts and Canada exists at the other end of that street, where people on either side of the border park their lawn chairs to chat across a road, some families passing food back and forth under the watchful eye of a camera mounted overhead.

Point Roberts is disconnected from the rest of Washington by water, requiring residents to drive through B.C. before crossing a second border into the state. But that trip can currently happen only under strict exemptions including for medical appointments.

Canadians and Americans with connections to the community want the border restrictions eased in keeping with a recent exemption to the 14 days' quarantine for other border towns including Stewart, B.C., next to Hyder, Alaska, and Campobello Island, N.B., where residents must drive into Maine to access other parts of the province.

Brian Calder, president of the Point Roberts Chamber of Commerce, said he's “outraged” that neither residents nor Canadians who own 75 per cent of the property there can cross back and forth while “sealed” in their vehicles without having to quarantine for 14 days, especially because the community of about 1,200 people has had no cases of COVID-19.

Calder said drivers transporting goods to the local grocery store and elsewhere make regular trips to “Point Bob” and tradespeople are free to cross the border into B.C. for supplies so others who rely on services, such as physiotherapy, should also be permitted to go directly to their destination and return home.

The biggest challenge for the community, which balloons to 5,000 people in the summer with Canadian visitors, is that the bulk of its economy is dependent on people crossing the border to buy gas or groceries, visiting its few restaurants or picking up packages at six shipping stations, Calder said.

“It isn't sink or swim, it's sink or sink,” Calder said of job losses, adding he has written to Washington Gov. Jay Inslee as well as federal politicians in Canada who have “abandoned” residents, 50 per cent of whom, like himself, are dual American-Canadian citizens.

Inslee's office has been in regular contact with the Canadian consulate in Seattle and several recent changes have been implemented, a spokesman for the governor said.

“Students will now be able to cross the border to attend school, which was an important issue for Point Roberts residents,” Mike Faulk said in a statement.

The 14-day quarantine exemption announced last Friday by Public Safety Minister Bill Blair and Health Minister Patty Hajdu applies only to residents accessing the necessities of life, such as food and medical services, from the nearest Canadian or American community.

The Public Health Agency of Canada said an exemption to the 14-day quarantine would not be applicable to Point Roberts.

“Based on an assessment of the circumstances specific to Point Roberts, members of this community currently can access the necessities of life within their own community, and are not required to cross the border,” it said in a statement.

“We're all one community here, and we're two very isolated communities as well,” McKay said, adding there is no U.S. customs crossing for Canadians going into Hyder but there is a Canadian Border Services Agency checkpoint.

She said the 63 Alaskans who depend on a grocery store and other necessities in Stewart were stuck at home for seven months.

McKay said the quarantine measure should also be eased for residents of Point Roberts and the Canadians who live there because they have been dependent on one another for decades.

“I really do feel for them because I watched what happened to this very small group of people on the other side of us,” she said.

This report by The Canadian Press was first published Nov. 3, 2020.